Hosni Mubarak has sacked the Egyptian Government and is trying to cling on to his position as president. Is this enough? The Chief of Intelligence, Omar Suleiman is sworn in as Vice President but how are the people going to react? 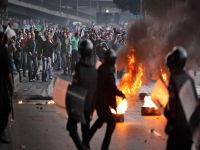 The question arising in Egypt today is how far the people want to go. What seems certain is that what is happening is very much in line with the other protests in the region, namely local concerns and not a pan-national anti-West or anti-Israel movement, as yet anyway.

On day five of the demonstrations, tens of thousands of demonstrators not only defied the curfew imposed by President Hosni Mubarak, but also saw the police moving back, at best... or at worst, running away, while the army took to the streets, in general terms well received by the people.

The demonstrations occurred in Cairo, Alexandria, Ismailiya, Suez, Giza and most of the major cities in Egypt in some form or another. At least 62 people have so far been killed and two thousand injured, translated into hatred against the riot police, who have disappeared from the streets, replaced by the army, which has taken a position near to the people...in Cairo, the crowds climbed onto the tanks and embraced the soldiers.

Mubarak sent the soldiers into the streets to restore order, not to embrace the population, which is what has happened.

The Egyptian authorities have denied claims that Mubarak's family has fled to London but dozens of Twitter messages have confirmed that Hosni Mubarak's wife Suzanne, his son Gamal and his son's daughter have arrived in London.