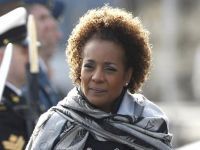 Michaelle Jean (photo), Special Envoy for Haiti of the organization of the United Nations Educational, Scientific and Cultural Organization (UNESCO), emphasised today the support received from Cuba in the matter of health to the Caribbean country, devastated by an earthquake a year ago. The official stressed the presence and contribution of many Cuban medical teams.

"Whenever we talk about health, we cannot forget the support of that country and this brotherly people," said Jean, former governor general of Canada, while recognizing the importance of maintaining that link, as somewhat fundamental.

Jean is a Haitian herself. Jean's family hails from Haiti. She was born in Port-au-Prince and baptised at the Holy Trinity Cathedral. Home schooled in Haiti, she spent winters in that city and summers and weekends in Jacmel, her mother's hometown. She is actively involved in humanitarian work, particularly in the field of domestic violence. About the international community in general she had this to say.

"As time passes, what began as a natural disaster is becoming a disgraceful reflection on the international community. Official commitments have not been honoured. Only a minuscule portion of what was promised has been paid out. The Haitian people feel abandoned and disheartened by the slowness in which the rebuilding is taking place."