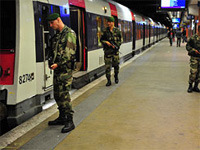 Many countries of the world have to deal with terrorism. France is one of them. France experienced terrorism for the first time after 1789, during the French Revolution. The country suffered from terrorism a lot after WWII as well.

French anti-terror services had to work in four different directions: ultra-rightists, ultra-leftists, separatists and Islamists. Islamist terror began to develop speedily during the years of the Algerian war. Algerian guerrillas attacked a number of important defense objects on the territory of France.

France has been struggling against leftist and rightist terrorist since the beginning of the 1960s. However, it was Islamists who posed the biggest threat to France. They conducted their terror attacks during the eighties and the nineties. In 1994, Algerian terrorists seized a passenger jetliner, which they planned to crash on the Eiffel Tower.

Over 3,500 people have been killed in terrorist attacks in France since 1974. Islamists conducted nearly ten large terrorist acts in the country, in which nine people were killed and 160 injured. The bloodiest act of terror was conducted in Paris on July 25, 1995, on Saint Michel station of the city subway. Seven were killed and 84 were injured in the blast.

France defeated Islamists during 1997-1998, although the struggle against terrorism in the country still continues. French special services conducted a series of massive preventive arrests in December 2002. Dozens of members of Islamist organizations planned to explode the Russian Embassy in Paris and the buildings of other Russian organizations in the country. The attacks were supposed to be conducted to take revenge on Russia for the death of warlord Khattab in Chechnya and especially for the extermination of 40 terrorists during the hostage crisis in the Moscow music theater.

French anti-terrorist services are structured strictly, with each department executing their own tasks. One should name Division Nationale Anti-Terroriste - DNAT, DST counterintelligence service, Gendarmerie, DGSE external intelligence service, Police Judiciaire (the court police, which specializes in detecting authors of crimes), and DCPG - the central administration of the court police, which cuts the funding of terrorist activities.

France gradually developed the adequate legal base, which allowed the country to react effectively to challenges of terrorism. In 1963, France set up a semi-military court structure Le Cour de surete de l'Etat (State Security Court), which allowed to punish terrorists without a backward glance on liberal laws.

All terrorist cases in the country are tried in Paris only, which gives the authorities an opportunity to keep their finger on the pulse and avoid even chances of not guilty verdicts for terrorists.

French law-enforcement agencies react to terrorist attacks in other countries too. After the attacks in Britain, the French government developed the special anti-terrorist package which stipulated tougher control over phone calls and email messages.

When serving as Interior Ministry, Nicolas Sarkozy, the sitting President of France, repeatedly promoted the policies of zero tolerance against everyone who is involved in terrorist activities either fully, partially, or just slightly.

To put it in a nutshell, the French are prepared to use extreme, unpopular and even doubtful measures against terrorists. They will not pay attention to external influences and pressure. For example, many criticized the French government after it ordered to remove garbage cans from the streets of Paris in the middle of the 1990s. That was the period of debauchery of Arab terrorism in the country, and terrorists would often leave bombs in garbage cans. Paris became dirtier, but the decision complicated terrorists' actions.