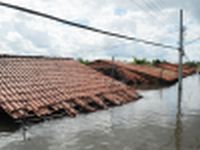 Leave a year and enter another year and tragedies repeat themselves during the summer rains. In 2010, there was Angra dos Reis and Niterói, now it is the mountainous region with hundreds of deaths. Tomorrow may be another area of Rio or the country. But worst of all is that if preventive measures could have been taken in the provinces, the number of victims might have been reduced. To do this you must change the concept of Civil Defense.

In Rio de Janeiro and the mountain cities land speculation took over. Buildings and homes were built without complying with the minimum security criteria and caused ecological imbalances.

There are years based on real estate speculation having the green light. Mayors, governors and legislators financed their campaigns by the business sector, subsequently collected their bill, and they still collect. Result: a complete breakdown in the calibre of the buildings in various districts of the cities and contruction was allowed in risk areas. Rio and the mountainous region around should say so.

The media market, which has long been covered with rich real estate advertising fell silent on these facts. The big newspapers and telejournals, however, saved no buildings in areas at risk in the slums. As if only the poor should be blamed for the tragedies of summer. By publishing editorials in the sense they were written, as if the poor were blamed for living in precarious conditions on the slopes of some hills.

As if all this were not enough, the Government has done little or nothing on the subject of prevention. Heavy rains now, even stronger than usual, were still predicted at least three months ago, according to specialists in the sector. And what was made of concrete to mitigate the consequences except promises and more unfulfilled promises?

In countries prone to natural phenomena of serious consequences, the effects are mitigated because the Government is preparing the population in advance. One example is Cuba, a Caribbean island, poor, subject to annual cyclones and hurricanes with perverse effects. Meanwhile, the State offers alternatives to the population and almost no casualties. To get an idea, 16 hurricanes between 1998 and 2008 resulted in material losses of 20.5 billion dollars, equivalent to half the GDP of the island.

Cabral as governor should know that many homes built in areas at risk well before the 80 years were also affected by the rains in the mountainous region. Poor people build their shacks in areas at risk not because they want to but because they must. To blame them for that is something elite, which is part of Sergio Cabral.

Another thing, if the Brazilian population is now 85% urban and 50 years ago the proportion was 85% rural, how did this shift happen? Did the government promote agrarian and urban reforms?

Exactly a year ago the earthquake happened in Haiti, the tragedy that has mobilized the world with promises of humanitarian aid and funds to rebuild Port au Prince. And what is happening right now? The images show that virtually nothing has been done, giving the impression that the earthquake was yesterday. There are even bodies still under the rubble, according to reports from the capital of Haiti.

Less than 20% of the $5.6 billion pledged by the international community have been delivered. Of the amount that arrived, most were used to pay debts. About one million Haitians live in makeshift camps, in conditions of poor hygiene and even worse: in Haiti, hundreds of thousands of human beings are being forced by the owners of land where they built their tents out of those places. They have nowhere to go, and have called on authorities to avoid evictions. The government is not the answer.

The world, with rare and honorable exceptions, prefers to send troops as "peacekeepers." The UN monitors the situation in Haiti rather than meet the medical need. One of the notable exceptions came from the Cuban doctors in Haiti. In fact, well before the earthquake, they were there with a team which attended in two weeks to 9,857 people suffering from cholera and without the occurrence of any deaths.

Around here, when tragedies occur, also promises and more promises are made. And with what results? Ask the affected communities. In Rio, the city intends to just enjoy the occasion and remove slums that are not in risk areas, considering the mega events of 2014 (World Cup) and 2016 (Olympics). And all this with the backing of big biased and manipulative newspapers and telejournals with agendas against the poor segments of the population.

For these and many other people, said the unsuspecting as Caetano Veloso, Haiti is here.

By the way: The governor of Rio, according to journalist Luis Nassif, donated to the Roberto Marinho Foundation 24 million reals of the FECAM (State Fund for Environmental Conservation) for slope stabilization and drainage works. That happened in October last year. Can you imagine how this is reflected in the coverage of Globo Organizations on the achievements of Cabral. But since he was elected, now he has to endure the consequences.

Libyan leader Muammar Kadhafi offered to the President of Brazil, Dilma Rousseff, help for victims of mudslides in Rio de Janeiro this week that left at least 744 dead, a spokeswoman told AFP. The offer was made during a telephone call to Rousseff from Kadhafi, said the spokeswoman.

"The Libyan leader called to congratulate the president on her inauguration on January 1. And in the conversation, Kadhafi offered any support and assistance needed to victims of this tragedy caused by the rains," the source said.