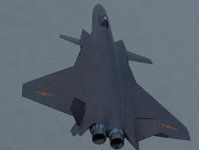 China tested the prototype of its fifth-generation fighter jet Chengdu J-20. The test became an unpleasant surprise for Americans because US Defense Secretary Robert Gates is currently visiting China. Mr. Gates repeatedly stated that China was developing fifth-generation aircraft, but he definitely did not expect that China would make such a surprise already during his visit to the country.

Andrei Chang, an editor with Kanwa Asian Defense magazine, reported the details about the flight of the new Chinese fighter jet. According to Chang, the test flight took place on January 11 over an airfield in the southwestern city of Chengdu where it was spotted carrying out runway tests last week.

Chinese officials neither rejected, nor confirmed the information about the flight of the plane. The news about the preparations to the maiden flight of the Chinese fifth-generation jet triggered many discussions in the world.

Practically all specifications of the Chengdu J-20 are being kept secret. It was reported earlier that the aircraft would enter service during 2017-2019. However, it is still not clear what kind of aircraft exactly took off on January 11 and whether it was a fifth-generation fighter jet at all.

The type of the engine used for the new Chinese aircraft is also a secret. Some experts said that the Chengdu J-20 most likely carries a Russian AL-41F1C engine, which is used in the production of fourth-generation Su-35 fighters. However, there were no official reports to confirm that Russia had sold such engines to China.

Military expert Alexander Khramchikhin told Pravda.Ru that China could indeed test a fifth-generation fighter jet. "In 2010, China's investments in the aviation industry increased up to 15 percent. As for the engine, the Chinese are still unable to solve the problem single-handedly. It was said earlier that China was in talks with Ukraine about the engines, although many experts were skeptical about that," the expert said.

Anatoly Tsyganok, the director of the Center for Defense Forecast, believes that China could have stolen the engines from Russia.

"Hardly had Russia tested its PAK FA fifth-generation fighter, when China did the same a year later, although they were absolutely not ready for it before. As for Chinese arms, China traditionally copies Russian arms - from assault rifles to fighter jets. There is one thing that always amazes me. Russia delivered both fighter jets and aviation engines to China. This is a strange situation indeed, because no one wants to buy a car without an engine. When Russia was selling aviation engines to China, we were pushing the Asian country towards developing its aviation industry. It is not ruled out, though, that China is bluffing. Maybe China is trying to exert some influence on the US Defense Secretary during his visit to the country.

"It is absolutely obvious, though, that China will solve all its technological problems very soon. The possession of the fifth-generation aircraft will give China an opportunity to compete with the United States in all respects," the expert said.

Nikolai Novichkov, editor-in-chief of ARMS-TASS news agency rejected the information saying that the above-mentioned Chinese fighter jet is equipped with Russian AL-41F1C engines. According to Novichkov, it goes about the Chinese WC-10 engine.

"What kind of an engine is it? It's hard for me to answer this question. Most likely, it goes about a rip off of the Russian engines, which were delivered to the country. It is also possible that the Chinese fifth-generation fighter was outfitted with AL-31F engine units used for Su-27 and Su-30 fighters. It's not a hopeless way of development. The aviation industry of the USSR was developing similarly. Or let's take, for example, the development of the Soviet laser-guided bomb. How was it happening? They retrieved a Phantom downed in Vietnam, took an American bomb from it and then studied it for years before building an analogue. Soviet engineers eventually succeeded. Making copies is a normal way of technological development. The Chinese do not just make rip offs, they develop what they copy."

"Judging upon the information that is available now, one may presume that China has recently tested a 4+ generation fighter. The Chinese will work more on it to improve its specifications by installing state-of-the-art airborne equipment. It does not seem to be likely, though, that they will pass the new plane into service before Russia does the same. Russia is currently testing state-of-the-art airborne equipment, which China does not have. It particularly goes about the radio electronic station with active phased antenna array. It takes years of test flights before a fifth-generation fighter could enter service. One would need to assemble seven or ten aircraft at first. Will the Chinese build several other planes like that? That sounds doubtful.

"Let's take the USA with its huge economic and technological potential. This country already has its fifth-generation F-22 Raptor jet. The first test flight was conducted on September 29, 1990. However, it took the Americans 15 years to pass the jet into service. The program of another fifth-generation fighter, F-35, is developing similarly. The plane has not been made operational yet," the expert said.