Arizona shooting: An outside viewpoint and the Palin gunshot site

Every time I turn on the television set and see that yet another massacre has been perpetrated by some gun-toting coward across the Pond I feel saddened because this is yet another tell-tale sign that our societies are no longer free. We are not, for instance, free to walk around a campus or go to a shopping mall for a meet-and-greet without fearing for our lives. Has the new Tea-Party climate of hatred gripping America made things worse? 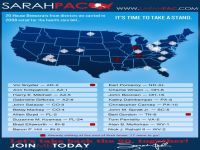 In this case, six people were murdered in cold blood, one of these a nine-year-old girl with a keen interest in local politics. Quite what one says to the parents and family of Christina Greene I have no idea because there aren't any words to describe the sheer injustice of what happened. A young, bright girl, newly elected student representative, going to a political rally no doubt to look and learn and ask questions, and out walks some "dude" called Jared Loughner, described as being 22 years old with a "troubled past". BANG.

The first question is what is a mental case like this doing with a gun? And secondly if

it is that disturbed, then why didn't the authorities lock it away from society behind bars? What was something like that doing trawling through a social event like this? Where was the security? And why does this type of incident go on and on and on and on and on time and time and time again? Why doesn't the United States of America do something about it? Whole countries have been turned upside-down recently, in Iraq's case, for far less.

Next, who is this older man they are looking for? Was this something more sinister, the cherry on the cake being the scalp of Democrat Congresswoman Gabrielle Giffords? Why is this Loughner being accompanied by a "minder"? And who is behind that? 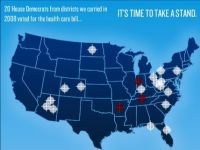 And what is this about Sarah Palin having on her facebook account a map with Democrat supporters of the healthcare plan being listed together with what looks like gun sights? Today it does not appear to be there, in which case, why has it now been taken off? And if it has been taken off, why was it there in the first place? What I am producing here is what is reported to have been the content of that map.

At the top, it reads SARAHPAC giving the website www.sarahpac.com. And then "20 House Democrats from districts we carried in 2008 voted for the health care bill" and on the right, in capitals (you can almost hear that strident, shrieking voice) "IT'S TIME TO TAKE A STAND". Under that follows what defies logic, namely a map indicating the location of these Democrats, complete with gun sights as if they were in the sights of a gun before being gunned down. At the bottom the names, and number 4 in the list is Gabrielle Giffords. 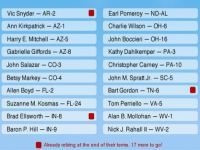 It is shocking because American society, instead of pulling together, seems to be determined to divide itself through hatred. One of the fundamental values the American people share is the ability to live together in communities based upon what they perceive as fundamental human values.

True, the globe-trotting antics of the Clinton and Bush regimes were outrages and those of us with a voice in the international media said our piece. Just as we all sat back with smiles of our faces waiting for Obama to lead the American people back into the hearts and minds and embrace of the international community, waiting to receive our brothers and sisters back with a warm handshake, look what happens.

And what happened today is a further example of this animosity which seemed to slide into bed with American society just at the same time that this Tea Party nonsense was springing up. Could it not be doing far more harm than good? And to what extent does American society need Palin right now?