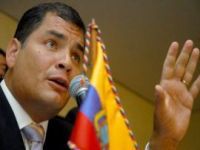 Ecuadorian President, Rafael Correa, announced a proposal to be submitted to the National Assembly to abrogate some taxes back to the beginning of this government in order to continue offering free universal health care. In the usual meeting on Tuesdays with the press of Guayaquil, the authorized representative spoke of the need to increase the sources for the state budget to cope with the increase of expenditures in health, whose ministry requires double the budget allocated.

"We're speaking of maybe restoring some back taxes that the government abrogated from the start and were badly utilized, such as five percent on calls from mobile phones," that was necessary Correa explained.

The Head of State urged a raise in the level of debate, because "if we want universal healthcare as the Constitution says, we want free medicine, we have to double the health budget."

He reiterated the budget should be doubled from the State regarding the percentage of the Gross Domestic Product (GDP), which is currently at three percent and should go to six per cent, which, he said, means some three billion dollars more for health.

During his meeting with the press, he assured that the fight against drug trafficking continues in the country, in response to the Peruvian daily The Republic he said that the poster of Sinaloa acts from Ecuador and Peru. "Ecuador is one of the most successful nations in Latin America to seize drugs," Correia said. Having no drug crops, "a universal evil also that affects the country it that it is between two of the world's largest producers (Colombia and Peru)."

Correa, who chaired this Tuesday the National Security Council, in Guayaquil, anticipated that there will be an increase in the weapons required as part of measures to combat insecurity, while at the same time, they asked the citizens to exercise caution.