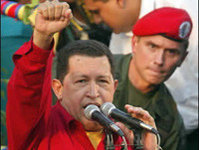 Hugo Chavez has launched a "New Year's War" against the U.S. He delivered a new portion of angry statements against Washington, and refused to allow a new U.S. Ambassador Larry Palmer into his country even at the cost of a possible breach of the diplomatic relations.

The dispute over Palmer's candidacy emerged last summer. Then, the former U.S. ambassador Patrick Duddy had left Caracas due to the expiration of his stay in Venezuela. However, the new appointment has not taken place.
Chavez did not like the statement of Larry Palmer that the morale of Venezuela's army is low, and that the ideology of the country is increasingly more influenced by the socialist Cuba. Finally, Palmer said that Venezuela hosted "terrorist bases" of the "Revolutionary Armed Forces of Colombia" (FARC), which Caracas has always denied.

Chavez called on to replace him with another diplomat. However, the U.S. State Department refused. In addition, the U.S. threatened to Venezuela that a refusal to accept the ambassador may cause further deterioration of already uneasy bilateral relations.

However, Hugo did not get scared. "We have refused to recognize this gentleman (Palmer), and now the U.S. government has threatened retaliatory measures. If they want to kick out our ambassador, let them do it! If they want to break off diplomatic relations, let them do it. To arrive here, the ambassador has to respect the country. That would be a shame if I allowed this man to come to Venezuela," said Chavez.

Lately, the Americans also allowed themselves undiplomatic remarks against Venezuela. They were not happy about the fact that on December 17 the Venezuelan Parliament granted Chavez additional powers to enact laws and bypass the Parliament itself. Chavez took advantage of it enough to anger Washington.

In particular, he created 10 special military districts, many of which are located on the border with Colombia, the main U.S. ally in the region. Others are located on the territory of Venezuela, in the provinces headed by the opposition. In this decision by Chavez Washington saw the pressure on its opponents.

The U.S. does not like his other laws aimed at strengthening of the supervision of the universities and cutting off the channels of financing of non-governmental organizations from abroad. As we know, thanks to such grants the Americans have nurtured "color revolutions" around the world.

The relationship between the U.S. and Venezuela has changed dramatically with the coming of Hugo Chavez to power in Caracas. But now we are talking about the threat of the break of the diplomatic relations, which is equivalent to a state of war.

Boris Martynov, Deputy Director of the Institute of Latin American Countries, commented on the situation for Pravda.ru.

- Is Chavez really, not just in words, ready to challenge the U.S.?

"This does not mean that he intends to break up the relations with the United States, knowing the dependence of Venezuela on oil exports. Chavez's words about a possible breakup is a puppet theater, a one-man show.

Realizing that he starts losing the ground, he turns to the means available to stir up the people, which is anti-Americanism. I foresee that in the near future, the verbal rhetoric of Chavez aimed at mobilizing his voters will only increase.

His statements are due to the deterioration of the situation in the country. First, after the elections to the Parliament where the opposition is stronger, it became clear that it has ceased to be a toy in Hugo's hands.
Second, he has wasted the enormous proceeds from oil sales to support friendly regimes and his economic platform is rather shaky.

- Why did the U.S. take such an uncompromising position?

"The Americans are not going to give in; otherwise it would mean losing their face. This is important especially now, when the U.S. has made so many mistakes in terms of Latin America. If we take into account Palmer's harsh statements, it is not surprising. The U.S. is now going to recover its lost position in Latin America that it considers its back yard if not fully, then at least partially.

Even the "peacemaker" Obama who also made some mistakes in terms of the policy towards seemingly strategic direction to the south of the Rio Grande makes statements of this kind.

Yet, most Latin Americans disagree. They believe that they do not need directions on how to live their lives, as they are capable of choosing the most appropriate way. You do not teach Asian tigers how they should live, do you?

- What is the future of Chavez's regime?

"The prospects of Hugo, frankly, are not that great. He will make any concessions to the opposition, knowing that it would mean the loss of power. He will not be able to influence the situation without the crackdown. He simply does not have the economic leverage to do it.

He has the last resort - the dictatorship in the full sense of this word, without appealing to democratic institutions like parliament and all sorts of elections. This is the short term perspective.

Yet, if you look into the distant future, Chavez is unlikely to keep his place long enough. It does not have to do so much with the U.S. tricks, but with the actions of Chavez, which led to a sharp deterioration in the economic situation in the country."