USA to humbly deprive Russia of all nuclear arms possible 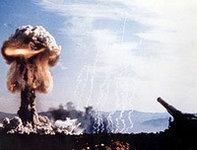 Unlike strategic nuclear arms, he range of tactical nuclear weapons (TNWs) makes up tens and hundreds of kilometers. The power of tactical ordnance (air bombs, warheads of tactical missiles, artillery ammo, depth bombs, torpedoes) usually does not exceed several kilotons and often makes up less than one kiloton. Nowadays, tactical nuclear arms are included in the arsenals of all nuclear powers except Britain.

US politicians repeatedly expressed their concerns about the TNWs: it is much easier for terrorists to obtain these weapons than long-range strategic missiles - the TNWs are smaller in size.

Rose Gottemoeller, assistant secretary of state for the Bureau of Arms Control, Verification and Compliance, stated that President Obama and senators of the two parties were intended to look into the matter of restricting tactical nuclear weapons in the nearest future.

"The Russians have a larger number than we do of these systems, and there has been some particular, I would say strong, urging from Capitol Hill that we move out," said Gottemoller. "Well, that is something that President Obama had already spoken about when he signed the (New Start) treaty in Prague in April of 2010. He said we would be moving on next to address reductions in tactical nuclear weapons and also in non-deployed nuclear weapons - that is, weapons in storage facilities," she said.

Russia has about 3,800 tactical weapons, compared with fewer than 500 in the U.S. stockpile, and the Americans are highly concerned about it. Russia has its own claims to the United States here. It is an open secret that a part of that stockpile is based in Europe. Moscow insists Washington should remove all of those weapons from Europe without any preliminary conditions. However, Gottemoller hopes, Russia will soften its positions and the talks on the issue will begin at the end of 2011.

Speaking about the perspectives for concluding the TNW treaty, one should pay attention to the following detail. US President Barack Obama stated that his country would build a uranium processing plant as a part of the effort taken to modernize the nuclear forces.

Pavel Zolotarev, deputy director of the Institute for the USA and Canada: "One should not reduce strategic nuclear forces without thinking about tactical nuclear weapons. What the Americans want at this point is not surprising at all. We can only welcome their wish to conduct negotiations. We do not know how long the talks will last, though.

"There is no catch about Russia here. The USA wants to control the countries that have recently established a possession of nuclear weapons. It goes about India, North Korea and Pakistan - these countries have tactical nuclear missiles. However, when the Americans say that they want to cut those weapons, their logic is not really clear. The Americans want the two sides in the talks - Russia and the USA - to relocate their TNWs from Europe. However, in this case, the USA will have to remove the weapons from the territories of European countries, whereas Russia will have to move its TNWs from its own territory, behind the Urals! This is a strange approach, and Russia will never accept it. It just so happens that the Americans do not have to be concerned about the Russian TNWs because their short range does not make it possible to use them against the USA.

"As for the news about the uranium plant, Obama is just trying to shut up his critics in the Congress. There is no information as to what kind of the plant it is going to be. They will probably be enriching uranium there, but it is also possible that it will be a peaceful production.

Military expert Vladislav Shurygin: "The goal of the Americans is simple. After they ratified the new nuclear arms control treaty and minimized Russia's possession of strategic nuclear arms, they want to do the same with tactical nuclear weapons.

"In this case, they will win absolute superiority over Russia: as for conventional arms, we lag considerably behind NATO on the whole and the United States in particular. We will not be able to resist them without the TNWs.

"I believe that the Americans will be able to get what they want here too. The Russian political administration does not want to deal with any confrontation with the West now. In addition, it seems that the Russian leadership has been captivated by the illusions that the current army reforms will eventually build a qualitatively new army, which will be ready to face any challenges."