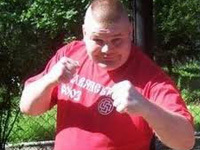 Big politics news may sometimes come from very unexpected sources. This time, the news came from ultimate fighter and ultranationalist Vyacheslav Datsik, known as Red Tarzan. He is currently being held at a detention center in Norway.

Making a speech at a court in Oslo on December 22, Datsik made a shocking statement. As it turns out, he was a FSB agent. He said that FSB (Russia's Federal Security Bureau) hired him to assassinate Akhmed Zakayev, Chechen separatist leader, who resides in London. In return, he was promised to be relieved of criminal persecution. Datsik also said that FSB had provided him with weapons for the assassination.

Datsik asked for permission to stay in Scandinavia. If delivered to Russia, he would be either killed or tortured, he said. Having told a short story about blood-chilling underground facilities of Lubyanka (FSB headquarters), the kick-boxer proceeded to the romantic part of his speech. He said that he was going to marry a Germany-based Russian woman, whom he had met after his escape from Russia.

Datsik's confessions will most likely make many eye-catching headlines in British and other Western newspapers that will only be glad to write more about "the evil from Moscow."

There are serious doubts about Red Tarzan's sincerity. There is no evidence to prove the intentions of the Russian authorities to get rid of Zakayev. Vyacheslav Datsik does not seem to be a good candidacy to fulfill any secret mission.

The name of Vyacheslav Datsik, who escaped from a psychiatric hospital in St. Petersburg in August and then mysteriously found himself in Norway, is shrouded in mystery. Many described him as a super champion and a fearless fighter for the "Slavic idea." This is not true to fact, though.

Datsik, 30, is a mixed martial artist. Many of such fights are conducted illegally, which means that the statistics of Red Tarzan's fights could be incomplete. However, from 1999 to 2003 he participated in 18 fights and was defeated in nine of them. He was probably a champion in illegal fights, but there is no evidence to prove that.

As for his political affiliation, Red Tarzan was a member of radical nationalist organizations promoting the reign of the "Arian race." In 2007, he was arrested for robbery.

Datsik also said that he had traveled to Europe several times together with his associates to murder people of non-Arian looks there. There was no evidence found to prove his implication in grave crimes. Datsik was diagnosed with schizophrenia and placed in a psychiatric hospital.

This looks like a very bizarre portrait of a special agent. He is an ultranationalist who commits hate crimes and who was legally found to be a mentally unbalanced individual.

In 2009, Datsik was transferred to a prison-type psychiatric hospital. In the summer of 2010, he was moved to a conventional mental institution. It was not hard at all for escape from that hospital. Would special services keep their agent like that especially if he was involved in a serious political intrigue?

Red Tarzan escaped from the hospital on August 21 and robbed a cell phone shop. Afterwards, he crossed the Estonian border and somehow reached Norway. In Norway, he befriended local skinheads and even taught them martial arts before handing himself to the authorities.

As soon as Datsik was arrested, the Office of the Prosecutor General of the Russian Federation started working on his extradition from Norway. A court of Norway has already sentenced Datsik to eight months for illegal firearms possession.

There is another reason to prove that Datsik's statements are nothing but lies. A special agent is supposed to be inconspicuous and hard to identify or recognize. Red Tarzan stands out as a ginger-haired man of stature and fierce expression of countenance. It takes mere seconds to find his pictures and videos on the Internet.