Belgium has been virtually canceled 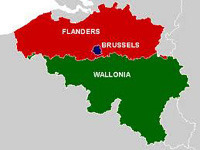 "Belgium no longer works. It is a nation that has failed." This loud statement recently came from Bart De Wever, a candidate for Prime Minister of this country and leader of the Nationalist Party The New Flemish Alliance. Thus, one of the leading politicians of Belgium acknowledged that the country that hosts the headquarters of the EU and NATO is on the verge of a collapse.

Parliamentary elections were held in Belgium in June, but the government of the country has been temporarily chaired by the Flemish Christian Democrat Yves Leterme. The attempts to form a new cabinet are failing due to the differences between politicians representing the country's two national communities - the Flemish and Walloon (French).

According to the Constitution of Belgium, the Cabinet should include both the Flemings and Walloons. Since over half of the population is Flemish, representatives of the winning party in Flanders have been Prime Ministers for over 30 years. In June, the winner of the Flemish voters was De Wever, a politician who openly speaks about splitting Belgium into two countries, Flanders and Wallonia.

This approach is unacceptable for Walloons. Unlike Flanders, where separatist sentiment is strong enough, Francophone insist on maintaining the unity of Belgium. This could be explained by the economic reasons (Wallonia is a poorer, subsidized region), as well as cultural and language factors (the French language, despite the formal equality with the Flemish, still dominates the cultural and social life).

However, the Flemish have exactly the opposite opinion. For several decades they have been insisting on weakening the power of the center and the transfer of powers to individual regions of Wallonia and Flanders. Flemish politicians have complained that they had to allocate too much funds for "maintenance" of Francophone, and they are demanding new powers. The Walloons disagree. Flemings are also unhappy with the fact that the Walloons do not make an effort to learn the Flemish language. As a result, a compromise cannot be reached.

The result of divergence of the views of the representatives of the two communities was the fact that Belgium has been living without government since June. De Wever, who was tasked by King Albert II to form the Cabinet last summer, is unable to find coalition partners among Francophone. Trying to find a way out of the crisis, the monarch for the first time in many years has entrusted the right to establish the Government to a Walloon, the representative of Francophone Socialists Elio de Rupo. However, this scenario was rejected by the Flemish.

The events that followed looked very much like a political soap opera. Albert II has again turned to "Prime Minister de Wever." The winner of the Flemish elections again spoke about the fact that for Francophone the expansion of the administrative and economic autonomy of Wallonia and Flanders was unacceptable. In practice, this meant a reduction in the amounts pumped from the Flemish budget into Walloon. The Francophone took it with hostility.

As a result, De Wever admitted that he would not want to continue the dialogue with the Walloon Region and prefers new elections. "It's becoming more and more difficult, at any rate, to form a federal government. If we join such a government, there is a great risk of losing the next election. We were elected because we support radical changes and because the voters trust us not to cave in after six months of negotiations," said the politician.

Whether the new elections bring results still remains a question. The results of the vote caused infinite troubles with the formation of the government. The ruling coalition was re-formed several times, so that seemingly prosperous Belgium is quite reminiscent of the current Moldavia, where the political crisis has become a permanent phenomenon. In the summer of 2010, early elections in Belgium have not brought stability.

According to their results, the party advocating the division of the country secured nearly 45 percent of votes in Flanders. "We can no longer ignore that this (independence) is wanted by the majority of the Flemish population. Therefore it is necessary to prepare for the end of Belgium," commented on these results Laurette Onkelinx, a representative of the Walloon Socialists and Deputy Prime Minister.

She was echoed by a Flemish Christian Democrat, the president Herman van Rompuy's brother, Eric Van Rompuy: "Belgium is in a coma. The patient is clinically dead." If we follow this logic, no new election will help the situation. Flemish separatists will receive approximately the same number of votes, they will demand that Flanders is provided new powers, Walloons will disagree, and the process can start anew. Elections - talks - new elections, and so on.

At the same time, the opportunity to "reanimate" Belgium seems to still be there. Recently, Flemish TV station VTM conducted a survey according to which 56 percent of the population opposed the independence of Flanders, and the opposite point of view was expressed by 33 percent.

Another Flemish broadcaster - VRT - also conducted a survey on the subject of maintaining the unity of Belgium. Its outcome is far less comforting: 66 percent of the residents of Flanders believe that the country will "sooner or later fall apart," while 46 percent want independence immediately. The explanation of the supporters of independence is not surprising: the Flemings do not want to feed the less affluent Wallonia.

If the collapse of the country does happen, it will by no means be painless. The main stumbling block will be Brussels. Historically it is a Flemish city, but most of its population today speaks French. The new border can be drawn right in the middle of the city. Belgian politicians (both the Flemish and Walloon) will have to wrack their brains over the solution of the issue with the capital.

It is time for the leadership of the European Union, whose headquarters are in Brussels, to think about it as well. So far the EU, which is formally chaired by a Belgian (Flemish) Herman van Rompuy, never spoke about the fact that Belgium is bursting at the seams and there is no end to its political crisis. The EU failed to put the Flemish and Walloon politicians to the negotiating table in their headquarters, put pressure on them, and suggest the ideas that would break the deadlock.

The war in Western Europe is unlikely to happen. Belgium is a wealthy country. Neither the Flemish nor Walloons will call anyone to weapons. However, the country does not function, and this cannot continue. Given the attitude of the Flemish (and now some of the Walloon politicians) negotiations about the division of the country and the formation of independent Wallonia and Flanders could be a way out of the impasse.