Freedom, repression and Gays in the US military

DADT: The USA scores another benchmark. At the end of 2010, the first decade of the new millennium, we have to decide, collectively, certain things. Among these are the eternal questions, who we are and where we are going, what we are and what we want to be. Among these questions that need to be answered resides the collective attitude towards homosexuality. 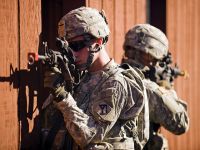 Where does the "Don't ask, don't tell" (DADT) campaign come into this? It is not about whether gays can be integrated into the US military forces, it is a question of them not being allowed to say whether they are "gay" or "straight". Now, is that absurd, or what?

For a start, among the questions we should be asking ourselves is, do we want to have a collective ideology, do we, as humanity, want to refer to ourselves as "we"? Do we want to have the right to opine as to whether Female Genital Mutilation is right or wrong, do we wish to hold an opinion as to whether a woman should be whipped in the Sudan because she dared to wear trousers, or stoned in the Islamic Republic of Iran because her husband forced her into prostitution to pay for his drug habit?

Or for that matter, do we have the right to claim that if Saddam Hussein was hanged for signing the death warrants of 148 people and George W. Bush signed 152, then...?

If we decide Yes, we do have a right and a will to form a collective code of behaviour for the whole of humanity, under the Human Rights Declarations and legislation defending equal rights for all, including the inviolability of the person, equal birthrights for all children, the right to travel, work, and so on, then we can move one step further.

And this step has to do with full human rights, namely the right to be who we are without any form of discrimination, whether this is our race, colour or creed, or sexuality. After all, what does it matter if a person proclaims (s)he is gay? And what has this to do with her/his performance in the armed forces?

Is a gay person less qualified to fire a weapon or interact with the local community when on a mission? Or drive a tank? Or fly an aircraft? Then if so are we to ban all gay bus drivers, all gay train drivers, all gay pilots? Or butchers, bakers, plumbers?

And what about those who do not have the courage to say they are gay? Or bisexuals? Or those who claim they are heterosexual and are not? And after all what does it matter, because Mr. Macho Man can brag at work about how many "chicks he pulled" when in fact his sex life revolves around dressing in frilly panties at home and inviting Internet friends to satisfy him. And so what if he does?

That is why today's Senate vote by 65 to 31 to overturn the 1993 law DADT (Don't ask, don't tell) allowing gay people to serve in the military forces, is yet another telltale sign that President Obama's USA is once more coming towards the international fold, where the hearts and minds of the international community reside.

More and more, we see a United States of America reflecting the best of what it has, namely intelligent, open-minded, instructed and open people, willing to build bridges, willing to embrace all peoples, races, colours and creeds. Sure, the rednecks will bellyache and a few may even post some idiotic comments below this piece. But here on this Russian site they are free to express themselves.

But let one thing be said: The United States of America, today, is not the same country as that ruled by the Bush regime. And today's ruling by the Senate is a decision which respects human integrity, inclusion and freedom for people to choose who and what they are.