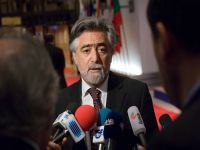 For "The Greens," the nebula continues around the CIA flights and what they imply in terms of human rights violations, since the statements made by the Minister of Foreign Affairs, Luís Amado. At his press conference, he said there is nothing at the moment to eliminate the possibility that these flights be realized.

"The Greens" still worry very much and consider it unacceptable that the Portuguese Government will, through this minister, in a press conference, assume that weakness is acceptable in the control of Portuguese airspace. By stating that "we cannot judge something secret," with these words he admits that there most likely have been secret CIA flights that violate Portuguese law and international treaties.

Moreover, and once again, hiding behind the "formality or informality of the steps taken in this context, the Government, like Pontius Pilate, tries to wash its hands of responsibility in a possible gross violation of human rights.

"The Greens" believe that respect for human rights and control of Portuguese airspace, respect for national legislation and international conventions governing these matters cannot be subject to the assumptions of a Minister who assumes that "as Portugal obliges, the United States also just uses."

The Ecologist Party "The Greens"