Youth of the world give life to festival in South Africa 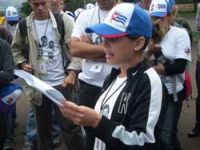 Delegates from over 140 countries give life from this Monday (13/12) at the XVII World Festival of Youth and Students in this capital, infected by the joy and the solidarity of those who traveled far to be here.

During the last hours, representatives from all regions of the world arrived in the city, and the Tshwane Events Centre, the space for accreditation, witnessed many attempts at communication between speakers of different languages.

In the opinion of many interviewed by Prensa Latina, nobody seems to want to miss this meeting of the new generations, whose first meeting took place 63 years ago in Prague. This current one will continue until the 21st of December.

This time, participants come together under the motto "In a world of peace, solidarity and social transformation, defeat imperialism." The meeting is devoted especially to the leaders Fidel Castro and Nelson Mandela.

This Sunday the fourth preparatory meeting of the International Organizing Committee was celebrated, and South Africa reached the category of ready to develop the XVII Festival, affirmed Jesús Mora, the secretary general of the World Federation of Democratic Youth to Prensa Latina.

He explained that the inauguration of the event, for which the South African President, Jacob Zuma, confirmed his presence, will start at 15:00 (local time) at Mariffield stadium with a capacity of 48,000 people.

Asked about the number of participants to this international meeting, Mora said that organizers expect about 10,000 foreign delegates and twice that number of hosts.

Cuba once again will be in the movement of the festivals, with delegates from that country traveling along with representatives from 27 countries studying in Cuba, said the first secretary of the Communist Youth League, Liudmila Alamo.

Again we will show solidarity and brotherhood with the people, and reiterate the request for freedom for our nation's five antiterrorists imprisoned in the United States since September 12, 1998, the leader emphasized to Prensa Latina.

The expanded presence of Cubans in Pretoria is also a tribute to internationalists, living and dead, from the Greater Antilles who participated in the struggle for the true independence of Africa.