US air base undermines Russia's improving relations with Poland 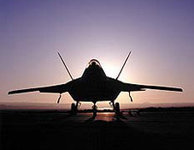 President Barack Obama, under whose presidency the war in Afghanistan has escalated, as well as the "reset" of relations with Russia has occurred, once again proved his "peacekeeping" intentions. After a meeting with another no less sincere well-wisher of Russia, the President of Poland Komorowski, he decided to deploy a U.S. Air Force unit in Poland. We are talking about expanding an airbase in the town of Lusk, which would ensure the reception of fighters and transport aircrafts.

Of course, such positive news about the intention of Russia's best American friends to send military units of the "knights of true democracy" to the Russian borders could not fail to please the Russian side. This drew the attention of the Russian Foreign Ministry that issued the following statement: "This step has to be considered in light of NATO's defense plan for Poland and the Baltic countries against possible Russian aggression, which has become public."

They are referring to the publications on WikiLeaks website. In this regard, the Foreign Ministry of Russia has noticed that "since 2009 a rotating base of the U.S. air defense Patriot has been deployed on Polish soil, the true purpose of which also raises questions. It seems that in this case an old reflex of NATO was triggered to build up forces to the detriment of other states. It is even stranger that all this is happening after the positive outcome of the Summit of the Council Russia - NATO and the alliance's declaration that Russia is not seen as the enemy."

A small detail - Patriot air defense missile systems originally sent to Poland were to be placed near Warsaw to capture the terrible, but not yet existing intercontinental ballistic missiles from outcast countries. But then, apparently after the realization that the Islamic Republic of Iran will no acquire them in the near future, Patriots have been moved to the borders of the Kaliningrad region.

Whose missiles do they want to catch? Of course, not Russian. This idea initially seems blasphemous to those who sincerely believed in the "reset" and a good president, peacemaker Obama. They can still hope that Patriots located at the Russian borders are designed to intercept North Korean "Taepodong."

No matter what it is, the deployment of such a facility in Poland will inevitably complicate Russian-Polish relations, which, after the recent visit of Dmitry Medvedev, had a chance to warm up.

But does the emergence of a new large U.S. base near the Russian borders comply with Obama's "reset" plans? Experts Pavel Zolotarev, Anatoly Tsyganok and Konstantin Sivkov answered this question for Pravda.ru.

"NATO's actions cannot but cause concern in Russia," said Anatoly Tsyganok, head of Center for Military Forecasting. "Despite the peaceful statements of Western politicians, everything happens exactly the opposite way. Earlier we were promised that NATO would not absorb the Baltic and Eastern European countries, but it has happened. Then someone assured us that NATO will not build up their forces there. We know the price of these allegations now, when all this is openly flouted. We can counteract this by building a solid relationship with the independent countries of "old Europe" like Germany and France, in defiance of U.S. and its Eastern European "neophytes."

"NATO remains a military organization, and, of course, its strategists are developing plans for possible hostilities with those countries that are not members," said the deputy director of the Institute of USA and Canada Pavel Zolotarev. "This is regardless of the fact if there is a cold war going on or not. They are doing their job, without thinking what intentions politicians will have tomorrow, recognizing what forces a potential adversary may have. And, NATO is influenced by the United States that accounts for half of all global military expenditures on defense.

With regard to the appearance of the new U.S. Air Force base in Poland, we should remember the words of Bismarck he said after the diplomats spoke about "good intentions" of their neighbors: "I'm not interested in their intentions; I'm interested in their capabilities." And NATO does just that."

However, it should be mentioned that in contrast to the gentlemen in Brussels, Russia fulfilled its obligations under the Treaty on Conventional Forces in Europe and agreed to leave in the European part of our country the force that would not scare NATO."

The first vice-president of the Academy of Geopolitical Problems Konstantin Sivkov told Pravda.ru that "Obama's behavior proves once again that NATO, building the military infrastructure in our neighboring countries, has launched the final phase of preparation of the aggression against us, which will be delivered by conventional means. Of course, the United States is aware that we have nuclear weapons. But the presence of chemical weapons has not stopped Europe from World War II".

What kind of reaction can be expected from Russia? In the same statement, the Russian diplomatic agency says that "we will be obviously forced to consider US-Polish plans while implementing our own programs of building the armed forces and working with our allies."

One of the Russia's responses may be placing mobile Iskander complexes in Kaliningrad region and Belarus. Earlier this prospect seemed very scary to Russian neighbors. In addition, NATO can forget for now about withdrawal of Russian forces from Transnistria. Of course, this will not help to defuse the situation in Europe. Yet, the entire responsibility for this falls on our American and Polish "friends.""