Recognition of Palestinian state should contribute to peace 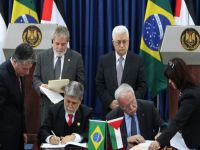 Hours after President Luiz Inacio Lula da Silva announced that Brazil is going to recognise the Palestinian state with the 1967 borders, sectors of the most conservative Americans and Israel made numerous criticisms of Brazilian diplomacy, arguing it can increase conflict in the Middle East. This decision, however, was praised by Palestinians and representatives of the Arab community in Brazil.

For Nathaniel Braia, responsible for the international section of the newspaper Hora do Povo and member of the movement Shalom-Salaam-Peace, composed of Jews and Arabs, it is a fair decision.

"The recognition of a Palestinian state on the borders of June 1967, is considered, as do the UN resolutions, that East Jerusalem be part of the Palestinian state and thereby become its capital," he affirmed in an interview with Opera Mundi.

The international community, and now Brazil, supports the demands for a Palestinian state on nearly all the Gaza Strip, the West Bank and East Jerusalem, which are the territories occupied by Israel since 1967 in the Six Day War.

The United States and most Western governments are reluctant to recognize a Palestinian state, arguing that it should be done through a negotiated peace with Israel.

The president of FEARAB (Federation of the Brazilian Arab state of São Paulo), Eduardo Felicio Elias, celebrates the decision by the Brazilian government believing it represents an historical recognition. "It was an attitude of justice because the 1967 war was a war of conquest. And the Brazilian Constitution does not recognise wars of conquest," he said.

For him, the declaration not only has symbolic value, but can benefit the Palestinians living in Brazil as well.

"It is going to improve the situation of Palestinian refugees living in Brazil with an embassy. But of course it would be the best for them to be at home," emphasised the president of FEARAB.

Braia also believes that the Brazilian government has been engaged in a positive way in the Middle East. "The Brazilian embassy was established in Ramallah, Brazilian delegations, some headed by President Lula, and they promoted meetings with leaders of the region and contributed to the country's closer ties with the Middle East," he affirmed.

Brazil's decision was announced on Friday (3 / 11) in a public letter to Palestinian leader Mahmud Abbas and publicised by the MFA (Ministry of Foreign Affairs of Brazil). Then the Israeli government criticized the move and said it was disappointed.

Braia, by contrast, argues that this is a decision toward justice that is fundamental "to the progress of negotiations in the region."

"Therefore, to recognize the Palestinian state - just like the earlier recognition of the PLO and Palestinian National Authority receiving its diplomatic representation in the country - is an act of the government that works toward peace, as opposed to injustice," assessed Braia.

Brazilian recognition was a response to the request made by Abbas on November 24. Since 1975, Brazil has recognized the PLO as "the legitimate representative of the Palestinian people" and in 1993 opened its first diplomatic office in the Palestinian territories.

Now, Brazil is joining a list of over one hundred countries that recognize the Palestinian state, among them all the Arabs, most of Africa, a great deal of Asia and Eastern Europe.