One country, two regions, two religions, two Presidents...recipe for civil war yet again. The Ivory Coast is yet again poised on the brink of a potential conflict. Incumbent President Laurent Gbagbo has been declared the winner of the presidential run-off by the Constitutional Council but Alassane Ouattara claims he has won. 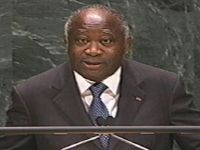 Two Presidents, one from the north (Ouattara, Moslem) and one from the South (Gbagbo). What happened? In the run-off for the Presidential election, held after tremendous international peace-broking efforts to ensure the country did not slip back into the civil war (2002), the National Electoral Body declared that Alassane Ouattara had won the ballot on November 28 by 54.1% to 45.9%

However, incumbent President Laurent Gbagbo was declared the winner by the Constitutional Council, which claimed that irregularities in the north had provided a false result and that Gbagbo had secured over 51%. Clashes in Abidjan, the capital, have left four people dead, as the UNO, USA and France support Ouattara, yet Gbagbo's supporters stand firm, after he took the oath on Saturday. Ouattara responded several hours later by doing the same thing.

In a tense stand-off the situation today is that Laurent Gbagbo's supporters declare that the 8.000 strong UN force does not have the right to declare the winner. The West African country's borders are closed...in the capital, Ouattara's taking of office was masterminded by the UNO forces.