Israel's blockade of Gaza was eased in June. Israel is facing a calamitous situation because of forest fires. People suffer. However, the plight of the people in Gaza is desperate. It is not opinion makers who are saying this, it is the United Nations Organization. And Israel is provoking an environmental calamity. 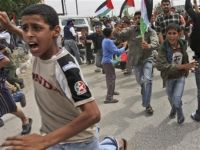 Desperate situation...lack of approval of humanitarian projects by Israel (which has no jurisdiction in Gaza but which exercises it, against international law), three-year blockade with disastrous humanitarian consequences...80 per cent aid dependency...10 per cent of the water is fit for human consumption.

Welcome to Gaza, which is supposed to form part of the Palestinian Authority, where Hamas was democratically elected as the political entity responsible for governing the territory. Israel has imposed a disastrous blockade, stretching the humanitarian fabric to the limit, and after the horrific damage caused by the offensive of 2008/9, continues to refuse to allow deliveries of iron and concrete to take place, because they are a threat to national security.

What are the Palestinians supposed to do? Throw concrete at the tanks which bulldoze their homes, which take away their lands to build colonies for Israelis on stolen territory?

Despite the fact that Israel has relaxed its inhumane blockade against the people of Gaza, materials necessary for construction, such as iron and concrete, are still being refused entry (illegally) into Gaza, a territory where there is a rate of 80% dependency, where 90% of the water supply is not potable, from where 80 million cubic litres of untreated sewage pours into the Mediterranean, daily. This is an ecological disaster.

John Ging, Gaza Director for the UN Relief and Works Agency for Palestine Refugees in the Near East (UNRWA), stated in a press conference in New York this week that "The plight of the people is still desperate...we have a huge amount of progress still to make to have a meaningful impact for the population on the ground".

According to the UNO, tens of thousands of family homes razed by Israel's savage onslaught are still in ruins, while Israeli-approved rebuilding plans account for some 7% of the projects approved so far.