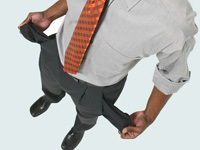 There is a scene from the 1967 movie classic Guess Who's Coming to Dinner that speaks to the title of this article. The movie stars Spencer Tracey, Katherine Hepburn, Sidney Poitier and a who's who of character actors of the day. It's the story of a black man and white woman who have fallen in love with each other and plan to get married. The couple have decided to break that news to their parents who initially condemn their love and plan to marry. The parent's initial opposition does not take into account the young couple's understanding that their love for each other is taboo and that they will be challenged mightily by political and social forces arrayed against them. Nonetheless, the lovers intend to challenge the system and leap forward together no matter what the parent's opinion of them (although Sidney Poitier gives Spencer Tracy an out). If the parents had their way (initially) they would have rejected the arrangement and opted to maintain the status quo of the day; that is, no marriage or relationship.

In the movie, the parent's education, knowledge and experiences have been shaped in an era (1910-1967) that is light years removed from their children's time and place. Tracey and Hepburn are an affluent couple in San Francisco (Tracey is a retired newspaper editor) while Poitier's parents are hardened middle class (the Dad, played brilliantly by Roy Glenn, is a retired mailman).

The father's are essentially civil servants; one delivers/creates the news, the other is entrusted with the US mail. They both have climbed the steep social and economic ladders of the time, and managed to produce stellar offspring. The parents, now elders apparently settled and wise from years of working and living, try to discourage the couple at every turn.

Until the parents relent in the end, we learn that the wisdom they've accumulated is nearly irrelevant to the time in which they live. Indeed, in one scene Tracey drives out to get an ice cream at a local drive-in restaurant but is flustered by the ordering process and the presence of youngsters he can't or does not want to understand.

Poitier's father, Glenn, is not amused at the prospects of the marriage. He, like most parents/elders, reminds Poitier how much he had to work so that his son could get the good things in life. He warns Poitier that in "16 to 17 States, what you are doing is against the law and even if the law were changed, people's attitudes don't change"

But in Poitier's mind, even this view is outdated and irrelevant.

Poitier then drives home a message which echos still from the 1967 movie set; a message that spoke not only to civil rights but to an entire generation that wanted to free itself from the selfishness of an older generation that could not break from its own past.

As Poitier's father attempts to lecture him, Poitier cuts him off:

Poitier: That's for me to decide man. Just shut up and let me...

Poitier: You say you don't want to tell me how to live my life? You tell me what rights I have and haven't got and what you've done for me!....Let me tell you something, I owe you nothing! If you carried that bag for a million miles you did what you were suppose to do! You brought me into this world and from that day on you owed me!...You don't even know who I am!....

Poitier: You and your whole lousy generation believes that the way it was for you is the way it has got to be!...Not until your whole generation has laid down and died will the dead weight of you be off our backs!

Ex-government officials from the right and left of the political spectrum like Bill Clinton, George Bush II, Jimmy Carter (and Barak Obama at some point), Alan Simpson, Pete Domenici, Anthony Zinni, Colin Powell and Bill Cohen shape shift to and fro around the academic, political, international, corporate and military landscapes. They, and their colleagues in "official" capacities, steer the direction of the USA's domestic and global polices. The proclaim, "this is the way it has got to be!"

They sit on commissions, corporate & government boards, study groups, and associations. They lobby for foreign governments often against the best interests of the American people whom, by the way, they view as uninformed masses who can't possibly figure out how the world really works (it does not work as the 10+ million unemployed Americans will attest). They write books that rewrite the factual historical record (George Bush II and Bill Clinton), pen op-eds for the papers of the US establishment--the New York Times, Washington Post and Wall Street Journal-- advise corporations, and appear on major news networks buttressing the views of their establishment brothers and sisters.

Their task is made easier by intellectuals who can be found in academia, assorted political think tanks and the MSM. They are like the Remora's who have a "commensal" relationship with sharks. A good example is Thomas Friedman. An unabashed promoter of globalization and assorted other establishment causes, his daily task is not really to enlighten and challenge but to support the system, the status quo.

The government's Fiscal Commission was expected to cost US $500,000 not including travel expenses and per diem. Let's call it a US $1 million expense. What did the country get for that price? The Commission proposed US $200 billion in cuts, one-half from defense and one-half from non-defense spending. Simpson and crew proposed eliminating federal jobs, reducing government print and vehicle costs and an assortment of other cuts that are mostly meaningless in the face of a US trillion dollar budget. A high school football booster club would do a better job of cutting the deficit than the Fiscal Commission. Further, there is always a loophole to maintain or increase levels of national security expenditure.

Over at the Bipartisan Policy Center, founded by Cold Warriors Howard Baker and George Mitchell, the Domenici-Rivlin Restoring America's Future plan is far more ambitious in that it uses a tax holiday along with a fear factor as a motivating force. Holidays and fear inspire it seems. "It's a matter of national security!" say Domenici and Rivlin citing JCS Chair Admiral Mike Mullen. The novel idea in their proposal is to suspend for one year ( a holiday worth US 650 billion) the 12.4 percent social security tax paid by employers and employees. They also propose "getting a handle" on healthcare costs. These two proposals, among others, will assist in the creation of millions of jobs and reduce spending they claim.

But the key question, ignored, that displays the myopia of the dead weight generation is this: What kind of jobs, workforce and economy are they trying to create? The deeper question is the appropriateness of a K-16 education for an American workforce largely performing service tasks that an eight grade student could excel at.

So, where do laid-off federal employees go? Are more "temp" jobs in the offing with less benefits? Will the economy increasingly rely on financial services which already make up 21 percent of the US GDP? Are fiscal commissioners and the dead weight generation willing to oversee the further hollowing out of America's industrial base?

Has anyone read this from the Chinese group Dagong?

"Due to the high economic financialization, more than half of the profits in the real [US] economy come from the returns of financial activities. If we exclude the factor of virtual economy, the U.S. actual GDP is about 5 trillion U.S. dollars in 2009, per capita GDP about $ 15,000. Meanwhile, the total domestic consumption was 10.0 trillion U.S. dollars and government expenditure was 4.5 trillion U.S. dollars. The production capacity of real value in the national economy is the material base to arrange social distribution and consumption. As the U.S. government arranges its budget according to the GDP including the virtual value, its revenue must fall short of its expenditure, so the socialization and normalization of debts will exacerbate the environment of economic development. It is predicted that the average real GDP per year of the United States will not reach 6 trillion U.S. dollar and per capita GDP will be less than 20,000 in the coming 3-5 years."

The Fiscal Commission has no good answer to these questions nor does its sister the Bipartisan Commission. All those American grand brains and fine institutions can do nothing more than repeat tired cliches that no longer have punch: cut entitlements and defense; privatize at will; change the tax code; raise/cut taxes; push financial troubles on to the states of the American union.

The reality is that the American intellect at the mid-to-top levels of the organizational pyramid is totally bankrupt; stymied really by the changes all around the USA and the world. They simply fall back, like Poitier's Father, on the notion that their pedigree, their station puts them in a position to decide what's right for everyone else.

The USA needs a new generation of Americans who will seriously challenge the status quo and rid the country of the dead weight of a generation. As the legendary USAF Colonel John Boyd once said (advising a young officer) there are two paths available; one selfish, the other not.

"One day you will come to a fork in the road, and you're going to have to make a decision about which direction you want to go. If you go that way [gesturing with his hand] you can be somebody. You will have to make compromises and you will have to turn your back on your friends. But you will be a member of the club and you will get promoted and you will get good assignments. Or you can go that way [gesturing his hand] and you can do something- something for your country and for your Air Force and for yourself. If you decide you want to do something, you may not get promoted and you may not get the good assignments and you certainly will not be a favorite of your superiors. But you won't have to compromise yourself. You will be true to your friends and to yourself. And your work might make a difference. To be somebody or to do something. In life there is often a roll call. That's when you will have to make a decision. To be or to do. Which way will you go?"