Orange Revolution 2 in store for Ukraine? 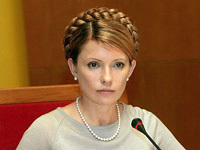 On November 22, Ukraine celebrated the sixth anniversary of the Orange Revolution with a rally of several thousand protesters who gathered at the Maidan. Formally the rally was organized by small and medium-size entrepreneurs, protesting against changes in the tax code. However, Yulia Tymoshenko, who was the engine behind the events six years ago, was willing to direct the event on her own initiative.

The situation in Kiev escalated further on November 18-19, when the Verkhovna Rada was considering the changes to the tax code. At this time, the entrepreneurs who held the rally demanded not to create laws which, according to the audience, would kill small and medium businesses. The members of the Parliament had a different opinion, and the changes to the Code were adopted. Now President Viktor Yanukovych must sign or reject the document.

It would seem that this is a purely economic dispute. However, the protest started on the eve of the anniversary of the Orange Revolution that wrecked the triumph of Yanukovych six years ago.

The current protest of entrepreneurs seems increasingly more political. After all, the heroine of the Maidan Yulia Tymoshenko is trying to "command" the process. Recently she attempted to wear the mantle of the martyr persecuted by the "revanchist Viktor Yanukovych."

On November 18, she personally hosted the protesters. After expressing their initial requrests, disgruntled businessmen have moved from the economic to the political plane. In fact, Mr. Yanukovych was given an ultimatum: if the President fails to veto the bill by 6pm on November 22, the representatives of small and medium-sized businesses will initiate a referendum on his resignation.

For its part, Tymoshenko's party "Fatherland" promised to support the protesters in every way. In particular, members of the BYuT faction decided to shield the entrepreneurs with their bodies, hoping that this will stop the police from the use of special devices.

Additionally, the protesters said that the meeting on November 22 will continue even if the court asks "the new orange" to clear the center of Kiev. The supporters of Ms. Tymoshenko and the businessmen who joined them kept their word and went outside. According to various sources, there were between 20 and 90 thousand protesters. The slogans shouted out from a megaphone clearly demonstrate that the participants of the protest of small and medium businesses identify themselves with those who entered the Independence Square six years ago.

For now, the authorities do not intend to suppress the protest by force. At any rate, the stories about horrible policemen who must necessarily disperse the rally, turned out to be commonplace horror stories. No one is seriously going to use water cannons or rubber truncheons against the businessmen and supporters of Tymoshenko. After some clashes with protesters, police showed no aggression. However, the guards blocked the approaches to the building of the presidential administration just in case. The current government remembers that six years ago, a crowd of supporters of Yushchenko was ready to storm the building.

It is important to note that the organizers of the protest did not forget to shift seemingly purely internal Ukrainian matter onto the international plane. Given the fact that today Yanukovych is participating in the Ukraine-EU summit, the opposition businessmen asked the EU to influence their President and force him to reject changes to the tax code. Six years ago, Yushchenko, Tymoshenko, and others also appealed to the international community.

Incidentally, the argument is quite serious. Given that the West is very sensitive to all sorts of issues of business freedoms, one can imagine that Brussels and Washington will be clearly unhappy with Yanukovych. He will be increasingly suspected of a tendency toward authoritarianism.

However, the government does not shy away from the dialogue with entrepreneurs. "We know that the claims of small and medium-sized businesses that work under the conditions of the so-called simplified tax are unfounded. We are ready for a constructive dialogue with them," said Prime Minister Mykola Azarov. In general, the styling of the current protests around the events of 2004 can be seen with the naked eye.

Authorities seem to be ready for a dialogue, but the opposition persists. Will Tymoshenko be able to shatter the position of Yanukovich with the assistance of businessmen?

"Most likely, Tymoshenko will not be able to create the new Maidan," said Mikhail Pogrebinsky, director of the Kiev Center for Political and Conflict Studies in an interview to Pravda.ru. "Yet, a lot depends on where the authorities will lead. They must seek a compromise with the entrepreneurs. For example, they should cancel the most odious articles of the new laws that suffocate businesses. There is no need in a dialogue with Tymoshenko. You can't even meet with her. That is, businessmen should be engaged in a dialogue, but Tymoshenko should be ignored. This way the government will be able to destroy the possibility of an alliance of the "Orange Yulia" with the disgruntled businessmen. The fact is that she has no control over the situation and is just trying to cling to the process.

As for Yanukovych, he acts primarily in the interests of large businesses. His officials simply repeat another thoughtless thing putting pressure on small and medium-sized businesses. The chief conductor of the change is Prime Minister Azarov, who is convinced that they are paying too little taxes. At first glance, the taxes are really low. Yet, it is somehow forgotten that entrepreneurs are forced to pay to various gangsters. Starting such a reform, it would be first of all prudent to deal with this shadow side of business."