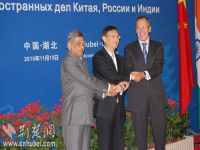 Russia, India and China are pursuing common goals in their international policies and economic development.

In what is the latest step to promote trilateral cooperation in a variety of fields, the foreign ministers of China, Russia and India met for two days last week in Wuhan, capital of central Hubei province. Tenth of its kind, the meeting was shown as being conducive to deepening trilateral ties between Beijing, Moscow and New Delhi.

Due to the increasing influence of these three countries in regional and world affairs, cooperation opens up opportunities for increased development.

These three members of what has been called BRIC (Brazil, Russia, India and China), cover an entire 40 percent of the world population, with a combined GDP of more than 15 percent of the world total. The three also enjoy a particularly advantageous geopolitical position, along with an abundance of labor, natural resources and scientific and technological advantages. The geographic location of the three countries also facilitates the deepening of triangular trade.

The three are emerging economies, locked into raising their international status, while they share many views on international issues. The three countries also call for reforms to the current world order. They also face common pressing tasks, such as the fight against religious extremism, ethnic separatism and international terrorism. For all, economic and trade cooperation is an important platform for their trilateral strategic partnership to take root.

The concept of a "strategic triangle" was the brainchild of former Russian Prime Minister Yevgeny Maximovich Primakov, who first used the term in 1998 during a visit to India. Although the approach generated little enthusiasm at the time, China, Russia and India have begun to recognize the importance of enhancing their triangular ties to safeguard their interests at the turn of the century, especially after the wars launched by the U.S. in Afghanistan and Iraq.

In that vein, the three countries held discussions with contacts by senior officials in September 2001, after which the foreign ministers held their first "informal meeting" in the Russian port city of Vladivostok in June 2006. At that time, they published a joint statement that emphasized the advantages of developing trilateral cooperation in specific fields as a way to make substantial contributions to peace and stability in Asia and the world. Heads of state of the three countries met in parallel with the meetings of the G8 summit in July 2006.