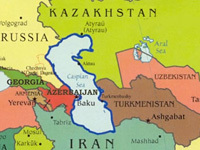 The countries of the Caspian region are trying to find a solution to a long-standing dispute about the Caspian Sea. There is something to argue about indeed: sturgeons, crude and natural gas deposits, as well as the transportation of oil and gas. The leaders of Russia, Iran, Azerbaijan, Kazakhstan and Turkmenistan gathered in Baku (the capital of Azerbaijan) to discuss the problem in detail.

The legal status of the Caspian Sea has not been solved yet. Consequently, not all Caspian states could settle the question about sea borders. Russia, Kazakhstan and Azerbaijan seem to have agreed on the issue, but the state of affairs in the southern part of the Caspian Sea is still unstable.

Iran's position is the main problem here. This country claims its rights for one-fifth part of the sea, which is unacceptable for all other Caspian states.

The Caspian dispute has triggered the militarization of the Caspian Sea. Turkmenistan's President Gurbangully Berdymuhammedov approved the establishment of the Navy of Turkmenistan. The country only had patrol boats before, and it was obvious that Turkmenistan was too weak to compete against the navy of Azerbaijan, which has the second largest navy in the region (following Russia).

"The Caspian Sea is not just a pool, as many people call it. The sea is very rich with oil and gas reserves. A special agreement, signed by the Caspian states, divides the sea into several zones, but some members of the agreement still argue about its terms. It seems that there is no peaceful solution to the problem, so the navy will play an important role at this point. One should also take account of the destructive influence of the West, the USA, first and foremost, as they attempt to destabilize the situation in the region," the expert said.

"Andrey Grozin, a senior expert with the Institute for CIS and Baltic States, believes that any country, including Turkmenistan, wants to defend its interests.

"The dispute between Turkmenistan and Azerbaijan is one of the key ones. They fight for the right to develop three large oil fields. Azerbaijan already develops two of the three disputed fields, which Turkmenistan considers its own. Western partners hoped that it would be possible to change the situation for the better after Turkmenistan had a new leader, but the problem still remains unsolved," the expert said.

Azerbaijan and Turkmenistan realize their importance to the West as fuel suppliers and they compete with each other. Turkmenistan understands that Nabucco will not happen without Turkmen gas. The resources of Azerbaijan play an important role in the work of the trans-Caspian gas pipeline. Azerbaijan is much more important when it comes to the transit of Central Asian gas to Europe.

It is an open secret that neither Iran nor Russia were considered as partners for Nabucco project. As for Russia, Nabucco was designed to eliminate Russia's influence in the transportation of natural gas to Europe.