NATO is the anathema of today's international community, serving no purpose other than pandering to the needs, whims and caprices of the arms lobby which gravitates around the White House, creating a supra-national umbrella apparently lending credence to its expansionist policies. 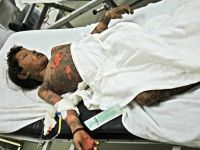 As billions of people around the world wonder how they are going to put a crust of bread on the table at dinner time, Lisbon's luxury hotels are all booked up for the visit of the NATO delegations, representing many of the countries which spent centuries siphoning off resources under imperialist policies, destroying peoples and cultures and committing massacres.

And as the NATO delegations gather for the conference, there is an enormous cloud on the horizon, so enormous it blots out the sun illuminating NATO's very existence: what is NATO?

NATO began as a military and political alliance to defend the North Atlantic space against attack, a mutual defence agreement guaranteeing a massive response to any attack on a member state way back in 1949, over sixty years ago. Most of Africa was still ruled by imperialist powers, the ink was not yet dry on India's or Pakistan's treaties of independence from the British Raj, Queen Elizabeth II (who today is celebrating almost her diamond anniversary, 6 decades, on the throne) was just a royal princess, Churchill was yet to have another term as Prime Minister of the UK.

This attack never came, mainly because the Warsaw Pact was essentially a defensive military alliance, and therefore any talk about NATO "winning" the Cold War is ridiculous, and proof of sour grapes by those who knew very well that had NATO ever started hostilities, the Soviet Union would have obliterated its forces and the main cities of its member states within minutes.

So when the Warsaw Pact dissolved voluntarily on July 1, 1991 following the voluntary dissolution of the USSR and the reshaping of the geo-political space it had occupied between January 19, 1990 and December 31, 1991 why did NATO not follow suit?

Thousands of pages have been written on this topic but let us condense them into one or two: NATO exists on one level, a military one, with pretexts to perpetuate its own existence existing on another two, the political and social areas. And the more we study, the more we see that the military arm of NATO is the head of the octopus.

Pretexts, indeed, because when the Warsaw Pact dissolved, NATO lied, giving various pledges over the years that it would not station "substantial combat forces" on territories belonging to the former Warsaw Pact. Yet NATO subsequently did expand, creating new markets for its weapons and creating new sources of financing for Washington's wars.

That having been said, the rest is easy to explain. Take for example the trillion-dollar wars in Iraq and Afghanistan (the need to finance an expansionist policy based upon control of the Earth's energy resources, not by Lisbon, or Tirana, or Copenhagen, or Brussels, but by Washington).

It is easy to explain when we see that the Pentagon likes to dole out military contracts for weaponry tested in the battlefield, hence the need to create more conflicts and the more member states involved, the greater the sense of legitimacy.

As a military alliance, NATO is an abject failure, restricted to paying off the Sunni militia in Iraq not to attack and to paying the Taleban to accompany NATO convoys in Afghanistan, while it is common knowledge that neither the Taleban, nor Al Qaeda, can be defeated by this multi-national force.

As a political grouping, how constitutional is it for NATO member states to support fellow members whose ex-leaders are the subject of arrest warrants for war crimes at the ICC in The Hague?

And as an organization which is trying to forge a social vector to justify itself, who or what is NATO and what right does it have to supplant the efforts of the UNO? And here lies the crux of the matter: in an international community with a United Nations Organization supposedly responsible for the resolution of international conflict and crisis management and now without a Warsaw Pact, where does NATO fit in?

The only option open to NATO in Lisbon is to do the decent thing and disband, as a mutual and multilateral token of goodwill. Yet this will not happen, for the psyche behind NATO is sinister and not decent and the organization is anything but multilateral. Ask Portuguese President Anibal Silva about the time he was Prime Minister, cowering in a bunker, at the time of the first Gulf War, and the pressures NATO exerted at the time upon the country which now hosts the Summit...

Now, if NATO engaged Russia and the CSTO with a view to creating a worldwide rapid reaction force, integrating it into a UNO which was universally respected, nobody would have an axe to grind.

To note, the anti-NATO organizations gathering in Lisbon must remember that they represent the anti-NATO international community and as such have the obligation to behave in a way which respects the law and does not bring the image of those who have fought long and hard for justice against this violent anachronism into disrepute.