Obama and the mid-term 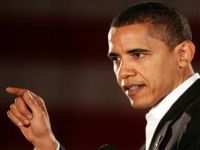 Commenting on the mid-term elections in the United States in 2010 a few weeks ago, one of the best known American conservative columnists, Charles Krauthammer (always remembered for his phrase "Unipolar Moment" to refer to the post-Cold War) predicted, as well as almost all political analysts, that the Democratic administration of Barack Obama would suffer a severe defeat in the legislative elections.

This defeat would consist of a return of Republican majorities in the House of Representatives and the recovery of some Senate seats, which may or may not result in conservative expansion. Both predictions have just been confirmed: the Republican majority in the House, Democratic majority's "tight" majority in the Senate, which did nothing to minimize the reality of a White House on the defensive, and clearly deflated.

Krauthammer argues that this result was a product of misunderstanding by the government of the aspirations of the population: Obama was elected to "solve the economic crisis" and not "change the American way of life." By taking up projects like universal health care reform, tax cuts for only high-income groups, preaching the restructuring process, beginning to review the missions in Iraq and Afghanistan and seek recovery of a secular state profile in which minorities, regardless of sex, religion and ideology could have their space, the President was not solving the crisis, but spreading what conservatives call "liberal-left agenda" that hid a "socialist" profile.

Symbolic of this conservative opposition, the Tea Party emerged as liberating force for the Republican side and on the Democratic side, the "Centre Democrat" who came to be defined by Fox News as "conservative Democrats." These Democrats moved away from the Presidency, isolating the White House, including their voting in the Legislature.

A practice reasonably known of the Democratic Party, this autophagy was also represented by an inter-party of the other extreme, that of the "Democratic Left," dissatisfied with Obama's performance in defense of social rights, humanitarian and environmental interventions. Would Krauthammer have some reason? Did Obama fail because he wanted to change America and not resolve the crisis?

This type of analysis that became the center stage of the debate reveals the polarized politics and a lack of consensus and will to reform. And in this case, not only in "Washington," but in society. Despite attempts to relieve the national-crisis project themes, their relation is intrinsic. The resolution of the situation involves national adjustments.

The crisis was, and keeps on being, a product of internal and external paradigms related to consumption, production structures, social relations, socio-economic disputes, imperial overextension, and educational problems of income distribution, those who oppose state projects and development: Obama who represented a resumption and updating of the Welfare State and the economy ("big state") and the traditional Republican ("small state").

In this "small state" add the religious crusaders and anti-government sentiment that has pervaded politics since 1994 when Bill Clinton, the then Democratic president, left office followed by the project "Contract with America," in which the "Compassionate Conservatism" of W. Bush was a chapter, bequeathing to us today the Tea Party. In 2010, Americans have again opted for this route.

The emphasis on religious themes and social subjects is a current tactic that has been repeated by other nations, including Brazil, as a way of diverting attention and polarizing people. In Brazil, however, the outcome of the presidential election was different, with the victory of the progressive sectors represented by the Dilma candidacy at the expense of that process. There came a warning that cannot be forgotten, because these movements are dormant and can easily penetrate into politics from various social situations.

It must not, however, be allowed to exacerbate the Republican victory, the influence of the Tea Party within the Republican Party or start the doomsday predictions for the future of Obama in 2012, even though Republican and Democratic sectors are already making queries about potential successors. It is being speculated whether Obama will become Clinton, who was reelected in 1996, or Bush's father who served only one term in 1992.

However, one must acknowledge that the outlook is not good for the Democrats and their reactions to the defeat can continue to be more counterproductive, or just under two years of paralyzed government. Such reactions, especially international ones, can lead to episodes of renewed unilateralism as the official propagates the notion of "civilian power" as a basis for redefining the country's diplomacy for global development (see article "Leading Through Civilian Power: Redefining American Diplomacy and Development," Secretary of State Hillary Clinton, in the special issue of Foreign Affairs November / December 2010).

The action of EDF's recent purchase of Treasury bonds after the election, and the rationale for Ben Bernanke in an article for The Washington Post reveal an action of this kind. Bernanke says, "the Fed has a particular duty to help promote increased employment and maintain price stability. (...) The measures will help to fulfill their obligations." The timing of these measures, coupled with changes in the IMF and the upcoming G20 meeting in Seoul, and pressures on foreign exchange and emerging commercial sphere, criticism of the political-economic projects in Brazil, China and India, shows this pattern. Furthermore, it demonstrates that the United States has not yet chosen the hard way. After all, to resolve the crisis does not just redistribute it to the world, but changes America.