Russia to become involved in another war on post-Soviet space? 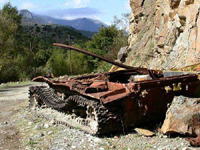 Azerbaijan is ready to unleash another war. This times it does not go about Nagorno Karabakh. The story is about Armenia. Azeri President Ilkham Aliyev made a bellicose statement on November 7 at the funeral ceremony held for the saboteur, who was killed in an armed clash on the border with Nagorno Karabakh. The Azeris, the president said, were ready to use military force to solve the Karabakh question any time. Speaking about Armenia, Aliyev said that it was an illegal state.

The president's remarks fit the circumstances in which they were announced. On November 7, Azerbaijan bid farewell to two military men. One of them died on June 18 when the Azeri army was trying to break through the line of contact with armed forced of Nagorno Karabakh. Ilkham Aliyev signed a decree to award the title of the Hero of Azerbaijan to the saboteur; a street in Baku will be named after the military man.

According to the president, Azerbaijan does not refuse from negotiations with Armenia, albeit only before the moment when it is possible to retrieve the country's integrity peacefully. "If we see that it is impossible, Azerbaijan will retrieve its territorial integrity militarily," Aliyev said.

"I don't doubt that we have all opportunities for it - combat training, material and technical means, ammunition and weapons, the professional army, high morale and the will of the Azerbaijani nation. We will be able to retrieve the territorial integrity of the country militarily," Aliyev said.

It is worthy of note that the Azeri president is known for his bellicose remarks. However, the statement that he said after the threat of using military power in Karabakh, has never been made before. Aliyev's remarks may mean that he denies the right of being an independent state not only to Karabakh, but to Armenia as well.

"Azerbaijan will retrieve its territorial integrity. Nagorno Karabakh is our land, our native land. The present Armenian state was founded on the land that historically belonged to Azerbaijan," Aliyev said. The president has probably forgotten that the ancient Armenian Kingdom was established hundreds and even thousands of years prior to the establishment of the Azerbaijani nation, not to mention the fact that Azerbaijan as an independent state was founded only in 1918.

Aliyev's remarks followed the talks with the President of Armenia, Serzh Sargsyan, which took place on October 27. The two presidents agreed to exchange the bodies of the military men, who were killed in a battle on the contact line between the conflicting parties. In addition, Armenia and Azerbaijan agreed to continue the dialogue to regulate the long-standing conflict.

Was Aliyev intended to gain political profit from his bellicose remarks? It could be possible, taking into consideration the fact that parliamentary elections took place in the country on November 7.

Armed clashes in the area of the Karabakh conflict occur on a regular basis during the recent six months, and the conflict seems to escalate. In addition, Azerbaijan has been involved in arms deal lately, purchasing arms from foreign countries.

For the time being, officials of either Armenia or Nagorno Karabakh have not showed any reactions to Aliyev's remarks. Armenia has its own vision about the history of the region. There are officials in the Armenian administration who believe that Azerbaijan is the territory of Armenia, which was taken away from the country by Arab, Persian and Turkish conquerors. Such an interpretation is obviously an exaggeration. Aliyev went too far as well. The Armenian state was founded over 2,000 years ago and took the vast territory from the Caspian to the Mediterranean Sea during the peak of its power. Armenia was the first state in the world to have recognized Christianity. Therefore, it is incorrect (to say the least) to consider the Armenian land as the land of Azerbaijan.

The recent statement from the Azeri president is another fact to prove how complicated the conflict between Azerbaijan and Armenia is. Too much blood has been shed during many centuries of the conflict between the two nations. The massacre of Armenians in Sumgait in 1988, the expulsion of Armenians from Baku, the subsequent expulsion of Azerbaijanis from Armenia and the war in Karabakh during the 1990s that ended with the defeat of Azerbaijan's army - all that is still fresh in memory.

It goes without saying that the Azeri army is technologically more powerful than it was in 1994. The Armenian army was not born yesterday either. Baku needs to bear in mind the fact that neither Brussels nor Washington will support Azerbaijan, as it happened with Georgia in 2008. The Armenian lobby in the West will be stronger than the influence of Azeri energy carriers.

The Nagorno Karabakh conflict is like the conflict in the Middle East, which seems to last forever. Bellicose statements shatter all hopes for peaceful regulation of the conflict. Armenia may take efforts to prove that Azerbaijan is a militarist state that nurtures another genocide against the country.

Armenia is one of the few countries where Russia has its army bases. Like it happened with South Ossetia, Russia will not be able to sit on its hands in case of a military attack against its ally.