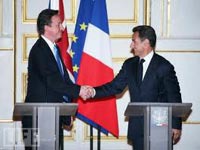 It looks like Europe is building a new military and political axis. British Prime Minister David Cameron and French President Nicolas Sarkozy will sign two treaties today in London. The treaties have already been dubbed as historical.

Are they trying to revive The Triple Entente established in 1904? The first of the two documents stipulates the unification of efforts taken by the two countries in the field of developing the tests of nuclear arms. The French-British center of nuclear modeling is expected to appear not far from the city of Dijon, in eastern France. The French will supposedly be in charge of the nuclear tests, whereas the British will supervise nuclear research.

At the same time, the diplomats of the two countries said that they were not intended to share nuclear secrets with each other. They are not going to establish the joint command of the nuclear forces either. What kind of cooperation will it be if they don't share secrets? There is no answer to this question yet.

The second agreement touched upon the defense field. France and Britain will establish the Combined Joint Expeditionary Force for conducting military operations in different parts of the globe. The group will consist of 6,000 troops on each side. Joint command is most likely to be created, but the British or the French will have a veto right for the use of the group in this or that unit. The agreement also stipulates reciprocal placement and fueling of aircraft on board aircraft carriers and cooperation on the sea.

"I do seriously believe that this link-up with the French is in the long-term interests of both our countries. And to those who worry that this might in some way lead to sort of European armies - that is not the point. The point is to enhance sovereign capability by two like-minded countries being able to work together," British PM Cameron said.

Indeed, France and British have a lot in common. The two countries used to be large colonial powers in the past, but their (especially Britain's) current influence on international politics has decreased considerably. Overseas territories, nuclear arms and constant seat at the UN Security Council - this is all that reminds of their erstwhile power. It goes without saying that both France and Britain want to change such a state of affairs.

There is another, a more trivial reason for the appearance of the military alliance between the two countries. It is the crisis. The two states took the course to cut their defense spending. For instance, France refused from building its second aircraft carrier, whereas Britain decided to cut the defense budget by at least eight percent.

The talks about the strengthening of defense cooperation between Britain and France surfaced in summer. However, diplomats were discussing an opportunity of establishing a small flotilla of three aircraft carriers - Britain's Ark Royal, Illustrious and France's Charles de Gaulle. As it turns out, cooperation on the sea is far from being enough.

Will the idea of the French-British union become real? There are its pros and cons about it. The armed forces of the two countries are equal in power. France is stronger from the point of view of ground forces, whereas England is traditionally stronger on the sea. Moreover, the cooperation between the two countries is a logic step taking into consideration the fact that last year France returned to NATO after 43 years, whereas England is considered to be one of the strongholds of the alliance.

However, the geopolitical interests of Paris and London do not coincide always. The matter is not only about the historical rivalry between the two countries on nearly all continents. Today, France tries to run US-independent politics; it is considered a locomotive of the European integration. Britain is traditionally considered a European skeptic, which cooperates with the United States.

"The idea to coordinate efforts between France and Great Britain in the field of defense is not a new one," Sergey Fyodorov, an expert of the Institute for Europe of the Russian Academy of Sciences told Pravda.Ru.

"In 1998, then-President Jacques Chirac and then-Prime Minister Tony Blair agreed to expand military cooperation between the two countries. One may say that the most recent initiative taken by Sarkozy and Cameron is a continuation of the initiative," the expert said.

Both France and Britain conduct arm reforms, both of them cut defense spending. France is also trying to find a good approach to Germany, to be able to balance between two strategic partners and historical rivals - Germany and England. Will the defense union become real? It is hard to say, France supports the establishment of the European army, which would not be dependent on the USA and NATO. Britain sticks to transatlantic brotherhood and special relations with the USA. Cameron clearly stated that the agreement with France would not cast any doubts on England's cooperation with the United States.