Over one hundred people dead, hundreds missing and massive destruction in Indonesia as a gigantic earthquake sent a tsunami crashing onto the western coastline. The worst affected area is the Mentawai islands, west of Sumatra. 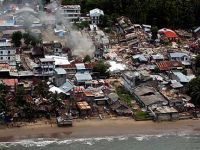 The earthquake measuring 7.7 on the Richter scale was followed by an enormous tsunami which killed at least 133 people and left hundreds of people missing. The destruction is so widespread that rescue teams are having difficulties reaching the affected area, according to the Indonesian authorities.

According to eye witnesses, at least ten villages have been razed, while heavy rains and strong winds make it impossible for helicopters to land in the affected area, and due to the fact that telephone lines have been washed away, the authorities are finding it difficult to gather and release exact information as to the number of victims and the scope of the damage.

Eyewitnesses tell stories of people who tried to hold on to their children but were unable to, seeing them swept away by waves three meters high.

The Mentawai islands are a popular destination for tourists. A group of Australian surfers staying in the area is incommunicable, according to the Australian Foreign Ministry, unable to contact them. Tourists on board ships speak of "a wall of water", followed by the vessels shaking and a loud roaring noise.

Tuesday's quake follows another large one on Monday, measuring 7.5 on the Richter scale, which did not cause victims or material damage.