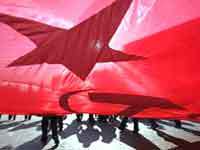 Russia can easily set forth counter claims to the Baltic States in response to their attempts to make Russia pay for the "Soviet occupation" of their territories. An international conference devoted to the subject of the Baltic States and Central Asia in the structure of the Russian empire and the USSR has recently taken place in Moscow.

Special attention at the conference was paid to the Baltic States, which continuously declare their determination to receive multi-billion compensations from Russia for the so-called "Soviet occupation."

Scientists proved as a result of extensive research that the economies of the Baltic States was regressing during their independence from Russia. The three countries - Lithuania, Latvia and Estonia - were developing as agrarian states. A strong industrial base appeared in the countries only after they joined the Soviet Union. The base was created at the expense of the Soviet Union, and the costs incurred considerably increased the "expenses of the Soviet occupation." Therefore, Russia can easily put forward its counterclaims to the Baltic neighbors.

Will the administrations of the three Baltic countries refuse from their attempts to make Russia compensate the years of the "Soviet occupation?"

Expert Sergey Mikheyev does not think that it is possible.

"The historians have not discovered anything new with their conclusions. It is obvious that the Baltic countries were in a savage state when they became a part of the Russian empire in the beginning of the 18th century. The foundation for the rise of the Baltic States was laid during the times of the Russian empire. When they pulled out from the Soviet Union, they were progressive republics. About 90 percent of their industrial base was built on Russian investments. As a result, the living standard in the three countries was higher than that in Moscow by the middle of the 1990s because of the Soviet and Russian investments.

"Everything straightened out as soon as the Russian support disappeared. The European Union helps the Baltic States in their existence, of course, but they will never have the things that they had during the Soviet times. The EU has too many problems to deal with, and the Baltic States should be prepared for worse things to come. That said, their wish to receive compensations from Russia is not going to vanish.

"There is another interesting aspect to the story. Lithuania - the state that has been particularly persistent in its financial claims to Russia - received a third of its territory from the "Soviet occupants." It goes about the Vilna region with the Lithuanian capital Vilnius, which used to belong to Poland. There is also the former German port of Memel, which is known as Klaipeda nowadays.

"Everyone in the Baltic States is perfectly aware of that, but they still set forth their claims to Russia. The political establishment in the country is incapable of conducting independent activities, and so they want to feast on Russia. Alas, Russia does not show the proper reaction to such claims, encouraging the Baltic countries to go further. They tell us: "You are occupants, you occupied the Baltic States and Eastern Europe, you violated human rights in the Caucasus." Russia just finds humble excuses in return.

"Look at what the USA does. Even after a series of shocking publications on Wikileaks, the stronghold of world democracy does not tone down its arrogance: officials of the US administration continue saying that they bring good, law and order to the rest of the world. Russia will have to deal with these endless political claims until its learns to respect herself," the expert concluded.