Merapi about to blow its top?

Indonesia's volcano Mount Merapi is about to erupt, causing the Indonesian authorities to raise the alert level to the maximum and to evacuate thousands of villagers living on its slopes. 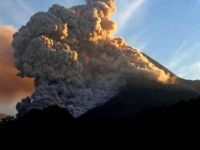 Mount Merapi, 26 km. south of Yogyakarta, Central Java, has been increasing in activity over the past week. Over the weekend, around 500 volcanic earthquakes were reported, as the magma has been pushed up to within one kilometre below the crater.

The 2,968-metre high Mount Merapi has erupted several times in the last decades. A massive eruption in 1930 killed around 1,300 people; in 1994, 60 residents were killed in another eruption and the last eruption in June 2006 killed two people. On Monday morning, all residents living within a ten-kilometre area around the volcano were told to evacuate as the alert level was raised to the highest: red.

Increasing spurts of lava had the authorities convinced that danger was imminent, causing them to sound the red alert. The Indonesian Government volcanologist, Dr. Surono declared that "The magma has been pushed upwards due to the escalating seismic energy and it is about a kilometre below the crater," adding that "It currently has more energy than before the 2006 eruption. We have not found strong indications that it will erupt explosively as it did in 1930 but there is still a possibility."

Sri Purnomo, Head of the Sleman Regency where the volcano is located, has declared that "officials have predicted that if it erupts, magma would flow to the southern side", adding that 11,400 people living on this slope are to prepare for "urgent evacuation". The population living close to the mountain numbers around 40,000.

The Indonesian authorities are setting up camps to accommodate the evacuees in Government buildings and sports centres at least ten kilometres away from the volcano. Merapi is the most active of Indonesia's 129 active volcanoes, strung out along 17,500 islands. Indonesia lies on the Ring of Fire, a series of fault lines and is located exactly on the junction of four tectonic plates: the Australian, Philippine, Eurasian and Pacific plates.