"My candidate is Dilma," says Chavez 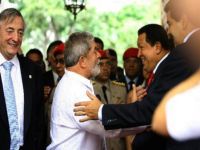 Venezuelan President Hugo Chavez said Saturday that the Chief of Staff, Dilma Rousseff, is their candidate for the Brazilian elections of 2010. "Dilma will be the next president of Brazil," Chavez said in his opening speech at the 2nd Summit of South America and Africa, held in Isla Margarita, Venezuela.

"I know that they are going to accuse me of meddling, but from my heart you know who's talking," he said. "My candidate is Dilma."

The minister has the support of President Luiz Inacio Lula da Silva to run for president by PT. Lula, who participated in the summit in Venezuela, smiled during the speech of his colleague. Chavez lamented the end of the mandate of the Brazilian president.

"But Lula will not go away, he is, as well as Néstor Kirchner (former president of Argentina), like someone who will go away but they are not gone," Chavez said, referring to the election of President Cristina Kirchner as her husband's successor.

During the plenary session of the heads of state, Chavez defended multipolarity in international relations and said the union between South America and Africa is "vital."

Lula, in his speech, said he believed "the transforming power of a partnership between regions that survive and live in a similar reality, similar situations and face common problems."

Criticism of the "imperialist model" was called a cause of underdevelopment in the two regions and was mentioned in most of the interventions of the heads of state.

"In the 20th century, what mattered was to sell and not to do it under a concept of cooperation, of the transfer of technology, which is what we're stimulating," she affirmed.

The preoccupation raised by most of the delegates is how to achieve integration of viable mechanisms for strengthening the south-south axis.

Chavez, who said before the summit meeting that from the meeting would come a work plan for the next 10 years, calling for the creation of a committee of ministers to devote themselves exclusively to the implementation of joint development projects.

"We have to raise the level and give more solidity to cooperation," he said.

Over the past six years, trade between South America and Africa was increased from $6 billion to $36 billion, of which Brazil has been the main beneficiary.

The first meeting of the ASA was held in Abuja, Nigeria in 2006. At the meeting this Saturday, the presidents decided that the next Summit in 2011 will be in Libya.