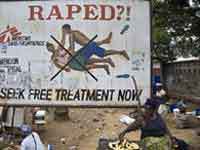 Margot Wallstrom, UN special representative on the prevention of sexual violence in conflict, urged the UN Security Council to introduce sanctions against rapists in the Democratic Republic of Congo. The official visited the region of Walikale in the east of Congo, where rebels had raped over 300 people. According to Wallstrom, the soldiers of the local governmental army are no better than rebels because they rape and kill civilians too.

Muhammed Adow, a journalist with Al-Jazeera, said that all armed groups in Africa use rape as a method of fighting because rape comes a lot easier than bombs and guns. In many cases, the journalist believes, the shame connected with rape makes victims stay away from their husbands, parents and other people in their communities.

The Democratic Republic of Congo takes the leadership in the world in terms of sex crimes. Over 5,400 rapes were reported during six months of 2009 in Congo's south, the UN said.

This is only a tip of the iceberg. ActionAid's International Director for West and Central Africa Ms. Dede Amanor-Wilks believes that many sex crimes committed in the country are not reported. According to statistics, though, 400 people are raped in the east of Congo daily.

Al-Jazeera has recently interviewed one of the victims, Nabwema Natabaro, who had been kidnapped and raped by a group of rebels for two months. Many victims, like Natabaro, receive HIV infection as a result of sex crimes.

"There is not even a day when they do not bring raped women to us. Nearly all victims require surgical aid because of inflicted wounds and bleeding," a gynecologist from the town of Goma said.

The conflict in Congo started decades ago, after the nation declared independence in 1960. So far, the war has claimed the lives of nearly 4 million people. The brutal standoff was accompanied with numerous incidents of cannibalism and rapes. The issue of unimaginable atrocities of Congolese rebels surfaced after 1968, when dictator Joseph Desire Mobutu amnestied rebel leader Pierre Mulele, a supporter of legendary Patrice Lumumba. Mulele was publicly executed in his homeland: he had his eyes ripped out of the sockets, his limbs were amputated one after another and his genitals were chopped off. The man was staying alive during the execution. His wife was gang-raped by hundreds of men and then executed too.

It is worthy of note that mass rapes are widely used in civil wars in Liberia and Sierra Leone. The war in Sierra Leone was outrageously brutal, even for African standards. For example, local rebels would brutally rape and kill pregnant women, cutting their stomachs open and taking the fetuses out. They would even argue with each other trying to guess unborn children's sex.

A similar state of affairs is observed in Sudan's Darfur, where members of Jenjaweed militia and soldiers of governmental troops regularly rape black women. To put it in a nutshell, the feuding parties act like savages, as it was thousands of years ago, exterminating men and raping women.

The problem is not only about the tribal and primeval lifestyle in Africa. Many local fighters believe that raping virginsis a reliable protection against AIDS and venereal diseases.

Many local dictators recruit fighters and do not pay them anything for their service. As a consequence, the fighters commit atrocities. Is there any way to end mass rapes in African conflicts? Pravda.Ru asked expert opinion from Sergey Karamayev, a specialist for Africa.

"It is impossible to improve the situation in Africa with the help of the measures, which the international community takes for the solution of African conflicts. The contemporary international law is overburdened with humanism, even when it comes to the cases when the use of military force is the only possible way out. As experience shows, the use of force brings positive results in many cases, and local conflicts become less intensive.

"The problem, which gives rise to African conflicts, is a many-sided issue. Large-scale clashes and civil wars began after colonizers started to leave the continent. As you know, the frontiers of many African states were drawn with the help of a ruler, which later triggered many territorial disputes and armed clashes. The conflicts that we can witness nowadays did not come from out of the blue. They have their roots in history. Tribalism is one of the basic reasons of ethnic conflicts and civil wars in Africa. As for the fact of mass rapes, it is a peculiar feature for practically all African conflicts. In Congo, for example, over 15,000 women were raped last year. One should bear in mind the fact that this is a common phenomenon for any war. Psychologists say that fighters commit such crimes because of extremely stressful conditions, in which they live 24/7 facing death every minute. They also use mass rape as a weapon against civilian population," the expert said.

A reasonable question appears at this point: does the UN do anything at all? Margot Wallstrom, the above-mentioned official, pointed out the positive factor of the UN-led activities in Africa: the recent arrest of two rebel leaders accused of systematic rapes. The official hopes that such measures will stop the growth of violence on the continent. If so, the UN will have to punish practically every male, because all males fight either for governmental troops or for rebels.

In many African countries one can see street billboards saying: "Women are not enemies, they are friends," or "Real men don't rape." The United Nations sponsored the initiative in a hope that the African population will get rid of their brutal warfare habits. This is basically all that the UN has done at this point. The United Nations spend millions of dollars for humanitarian operations in Africa, but nothing changes.

There is another aspect to the story. Many conflicts in Africa are based on the war for "blood diamonds," which local rebels use as money for purchasing weapons. The notion of blood diamonds does not include precious stones only. It also implies gold and tantalum - a precious metal used in the electronic industry. Western companies purchфse African diamonds, gold and metals, encouraging the continuation of bloody African wars.