Iran: There is evidence that the U.S. is supplying Israel with nuclear material 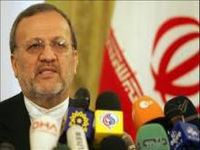 The chief negotiator on the Iranian nuclear program, Said Jalili, assured on Monday that his country will soon publish documents showing that the U.S. is supplying Israel with nuclear material. To Jalili, the main issue in the Arab world is how the Zionist regime can get those weapons. Israel is considered the sole nuclear power in the Middle East, while both the Jewish state and several Western countries suspect Iran is trying to make an atomic bomb, which Tehran denies.

Much of the so-called "international community" in the west, accuses Iran of hiding under its civilian nuclear program, another of a clandestine nature of war and applications for war, whose objective is the acquisition of nuclear weapons. This is denied by Tehran.

In November of last year, Iran rejected a proposal from Washington, Moscow and London to exchange its 3.5% uranium for nuclear fuel for the research plant that they possess in the capital. Since then, there have been no formal negotiations between the parties.