In Brazil, the second round of the presidential election begins 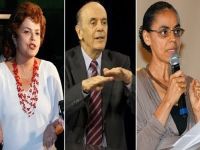 Brazil, the start of the second round of presidential elections on October 31, began with the Government's candidate Rousseff (PT) in front of the opposition candidate José Serra (PSDB) amid a violent religious war with biblical language in the many moral and religious differences among candidates.

According to the latest survey from the Institute DataFolha, held after the election three days later, Rousseff has 48% of the votes of the Brazilian electorate and 41% for Jose Serra. The difference between them is seven percentage points.

With a popultion of 195 million and 130 million of whom are voters, over 92% profess Christianity. Brazil is the largest Catholic country in the world and against the practice of abortion, a factor that led the second round of presidential elections into a violent religious war, involving, besides the candidates, the Catholic and Protestant churches and various religious sects.

All of this religious war between the two presidential candidates is due to the fact that during the campaign for election in the first round, held on March 3, Rousseff championed decriminalization of abortion and was against Jose Serra.

Now, in the second round, Dilma Rousseff and José Serra discarded political issues and are using moral and religious tones with biblical language in chanting tones, preaching the defense of life and condemning abortion.

On TV and Radio, Dilma Rousseff is presented as a good woman who follows and defends the religious and moral values preached in the Holy Bible, while Jose Serra talks about the beauty and greatness of motherhood, a divine gift that the woman received to perpetuate the human species on Earth.

All this, to seduce 4% of voters who wish to vote blank or null, and another 7% who are undecided, and finally win that 11% share of the Brazilian Christian electorate.

If the election were held today, Dilma Rousseff would win the contest for the Presidential Palace in the second round. There are also 4% of the voters who vote blank or null and 7% undecided. This percentage of 11% of the electorate, flying without a candidate, is the great trump, if either Dilma Rousseff or José Serra are to win the presidential election in Brazil.

The Datafolha did 3,265 interviews, in 201 cities, with a margin of error of two percentage points, plus or minus. When we consider the valid votes (excluding the blank and void), Rousseff has 54%, with 46% for Jose Serra, a difference of eight percentage points.

Before the election's first round the last three days, the DataFolha asked voters how they would vote in a runoff between Serra and Dilma. On the 1st and 2nd of October, Friday and Saturday, before the election of the first round, a simulation of the runoff, Rousseff would have 52% to 40% for Sierra, with 5% of voters voting blank, null or no and 3% undecided.

Compared to this latest research, Rousseff had lost four percentage points. She had a wobble in the maximum margin of error. Before the first round, Rousseff would have at least 50%, and now may be up to the same 50%, according to the DataFolha.

As for José Serra, candidate of opposition to the Government of Luiz Inacio Lula da Silva, who supports Rousseff, the variation was only one percentage point from 40% to 41%.

The points subtracted from Dilma Rousseff were incorporated by the voters that vote blank, void or that are undecided. A week ago, all those voters added up to 8%, and today adds up to 11%.

The percentage of Marina voters who would vote for Dilma Rousseff has dropped in recent days. The Datafolha survey, three days before the election of the first round (29/09), Dilma Rousseff has 31% of the votes of Marina Silva, a day before (10/02) it fell to 29%, and has now dropped again to 22%

Interestingly, the opposition candidate to the Government, Jose Serra, has not increased his ability to seduce and win the votes of Senator Marina Silva, the losing candidate in the first round. Three days before the election of the first round (29/09), Jose Serra had 51% of the votes of Marina Silva, a day before (10/2) it dropped to 50%, and now has returned to 51%.

Amid all the ups and downs of voters who would vote for Senator Silva that would vote for Dilma Rousseff and Jose Serra, the candidate of the Green Party announced that the PV will make a series of consultations before announcing possible support for Dilma or Serra.

However, the decision of Marina Silva in favor of Rousseff or Jose Serra divides Brazilian voters, who will not transfer their voting at the request of anyone.

4According to Datafolha, 42% of those who voted for Silva in the first round of the presidential elections in Brazil think that support should go to Rousseff, and 41% want to declare support for José Serra. Moreover, 7% said support should not go to anyone and 10% did not respond.

There are still 13% of the voters would reject a candidate who has the support of Silva. The president, Luiz Inacio Lula da Silva, has influence over 39% of voters who say they vote on who he will support.