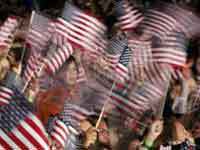 Apparently, it is very difficult for Americans to understand which qualities their president should have. Opinion polls show that most US citizens estimate the work of Barack Obama and his predecessor George W. Bush equally. Since the two presidents seem to be the same for the voters, it is highly possible that the Oval Office of the White House will be taken by someone else in 2012.

CNN/Opinion Research Corporation conducted a poll trying to find out who of the two presidents is better and weather the Americans regret the choice that they made in 2008. The sitting president was obviously the leader a year ago and had the advantage of 23 percent of votes over George Bush. Nowadays, Obama is only two percent ahead of his former colleague: 47 percent of the polled said that Obama could handle his job better than his predecessor did. Fifty percent of respondents believe that they had made the right choice when they voted against Republican candidate John McCain.

So what is the USA all about? Is it democracy or neo-conservatism in disguise? There is small choice in rotten apples indeed. Both Barack Obama and George W. Bush have one and the same headache: the Senate and the Congress. Strange as it may seem, US senators and congressmen act, for the most part, as political adversaries for Obama and Bush. In 2008, the "democratic" Capitol had to come to terms with the fact that the then president had withdrawn the agreement between the Russian Federation and the USA in the field of the peaceful use of the nuclear power. In addition, Capitol Hill had to swallow Bush's determination to demonstrate the US supremacy in Iraq.

Now Mr. Obama has to be at war with the Congress lobbying Moscow's interests regarding the issues of the WTO membership, START-2 Treaty and the Jackson-Vanik amendment. The most amusing aspect here is the fact that the Republicans and the Democrats had completely exchanged their voters by the end of the 20th century. Nowadays, it is very hard to understand where the elephants go and where the donkeys are. Therefore, there is nothing surprising about the fact that the difference between the ex and the sitting president is so tiny. To all appearance, people's love for the two presidents disappeared just as quickly after the elections as it appeared before them.

One can see a road sign when entering one of the American states: "Connecticut Welcomes You. Birthplace of George W. Bush. We apologize." Will Obama be remembered like that too? We shall wait and see.

"In many respects, Barack Obama found himself in the situation in which it was impossible to avoid mistakes. Too many voters in the United States pinned too many hopes on the new president and his contradictory promises. Disappointment was not slow to arrive. Obama's rating was rolling down the hill faster than that of Bush. Obama had to play on different electoral fields, and his suggestions could not be bluntly categorized as either Republican or Democratic. As for the Democratic direction, there was the healthcare reform, a number of amendments were approved. However, he appeared as a true Republican in many other issues: tax benefits for small business and the program of assistance to financial organizations (launched by George H. Bush). Obama has become a hostage to delusive hopes. The most paradoxical and most dangerous factor for the American political system is the decline of the president's rating that entails the collapse of the system per se," Dmitry Abzalov, an expert with the Center for Political Conjuncture of Russia told Pravda.Ru.

At any rate, the sitting president did not start to lose his rating in foreign politics, as George W. Bush did. Clumsy attempts to rally the nation during the time of the economic crisis make many see a striking similarity between Barack Obama and Jimmy Carter, the unfortunate president, who lost his second election. A number of outstanding people have already left Obama's team although they could help him in the struggle with the decline of the dollar and the situation in the American banking system.

The word 'former' can now be used when speaking about the following people: Christina Romer, chairman of President Obama's Council of Economic Advisers, Peter Orszag, budget chief and Lawrence Summers, the director of the National Economic Council. The departure of the latter took place during the intense political struggle prior to the midterm elections in the Congress on November 2. The changes in the team have cost $800 billion to the federal budget. More importantly, one may say that the American economy has been decapitated. The unemployment, the enormous budget deficit, and the healthcare system raise serious concerns with electors. It is worthy of note that it was Summers who could become a good support to Obama in the struggle with "leftist" economists, who wanted to nationalize banks and boost internal demand in the economy. It will be impossible for Obama to handle the Republican majority without Summers.

Two years ago, Mr. Obama decided to sell the American Dream to the Americans. His "Yes, We Can" campaign made him extremely popular in the nation. Hillary Clinton made her own contribution to that after she gave her votes to Obama in exchange to the position of the Secretary of State. However, even independent electors will now vote for Republicans after they have been so disappointed in the new administration. Many Americans believe that their country is moving in the wrong direction and that the president is too liberal. Resetting relations with Russia, the scandal with the construction of the mosque on the site of 9/11 terrorist attacks - all these things do not add popularity to the cheerful president.

"The past vote showed that Obama nearly lost the election because he was standing up against Hillary Clinton, not John McCain. Too many Republicans claim to be Obama's rivals at the moment - from Gates to never-fading McCain. It all depends on the Republicans' choice of the single candidate. Obama's biggest problem is connected with the Congress and the Senate - nearly all of his projects find no approval there. It is absolutely normal that the voters want to find a tougher system of management, which would be fully responsible for what is going on in the country. All of these and other aspects undermine the image of the president. As a matter of fact, Obama does not have anything to be proud of as far as his work is concerned. The only thing that he has is the Nobel Peace Prize and that's it," expert Dmitry Abzalov said.