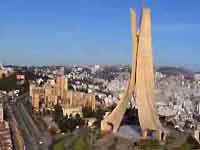 Algeria does not need Russian products as much as it needs Russian investments. This is the general tone of the assessment of Algerian journalists after an official visit of the Russian President on October 6, which was named "fleeting, like the MiG, but multi-valued" by no accident.

El Watan paper wrote that now one of the tasks of the Russian government is to bring the Russian-Algerian relations back to the same level that existed prior to the end of the Cold War, and to regain influence in Algeria and the Mediterranean as a whole.

For Russia, Algeria is a very important partner. It was the Soviet aid during the War of 1954 - 1962 that helped to free this country from France. Since gaining independence in1962 until the end of 1980, Algeria had been one of the allies of the USSR.

Having chosen the socialist path of development, the country continued to receive generous Soviet aid. Moscow armed it with weapons at discounted prices, which helped it win in the clash with Morocco, built housing, rebuilt its national economy shattered by the war with the French, and made generous gifts like a huge steel plant in the city of Annaba in eastern Algeria.

At the end of 1980, due to the aggravated crisis in the Soviet Union, this aid dried up. And almost simultaneously the "friendship" disappeared. Algeria refused to be guided by Russia in the political sphere, though continued to maintain communication with Russia in the development of the petrochemical industry and in military-technical cooperation (MTC).

In the late 1993 - 1994 these ties became even weaker. In Algeria, there was a rampant Islamic fundamentalism, which, in October 1993, started the "hunt for the white" with the destruction of a group of Russian helicopter pilots in the city of Laghouat. In this regard, in December of that year, a partial evacuation of Russian civilians and military experts and their families began. However, the remaining specialists later became victims of attacks by the Islamists. This suggests that the Algerian side has failed to fully ensure the safety of foreign professionals.

After that, the Algerian Islamists have been repeatedly noticed in Russia during the counterterrorist operation in the North Caucasus. The joint struggle against Islamic radicals brought the authorities of the two countries together.

Over the past 10 years a progressive development of bilateral relations has been witnessed. Algeria is still one of Russia's main partners in the MTC. No less important is the joint implementation of energy projects.

Algeria is a major supplier of oil and gas to world markets. It ranks second in the world in the export of liquefied gas and the third in natural gas exports. Mainly, the Algerian gas runs to Europe, and countries like Spain, Italy and France are heavily dependent on its supplies.

However, the authorities expect to expand the extraction. In fact, Russia is ready to help. First of all, the Algerian side counts on foreign investment.

It is no coincidence that the joint business projects have been key topics of discussion during the official visit in Algeria of Russian President Dmitry Medvedev on October 6.

However, there is no complete clarity on the amounts of contracts yet. Originally it was known that the Russian side would not mind to acquire cellular company Djezzy, as well as a part of the shares of BP that worked in the local market. Yet, there is no evidence that VimpelCom that are targetingthe acquisition have managed to do it yet. One reason is that the Algerians would not mind to acquire Djezzy themselves.

Algerian journalists write that Russia was made an offer. It can get what it wants, but on the Algerian conditions. According to the correspondent of The Financial Times and a prominent blogger Heba Saleh, Medvedev has a lever to push: Russia is the main supplier of arms to Algeria. But the authoritarian leader Abdelaziz Bouteflika of Algeria is an unyielding man.

So far, the fate of the cellular operator Djezzy is unclear. But as the Algerian paper TSA wrote, the issue can be solved in the affirmative: "Algeria has agreed to the deal in exchange for cooperation with Russia." Algerians called the deal "strategic" for Moscow. The acquisition of Djezzy, the most profitable branch of the corporation Orascom Telecom Holding, will allow VimpelCom to begin a dialogue on the acquisition of its Italian and Greek subsidiaries Wind and TIM Hellas, which will give it the opportunity to gain a foothold in the mobile market in Western Europe. The access to this market is provided extremely rarely."

What do the Algerians want? One of the conditions is the supply of suppression systems at a reduced price. The attempts to acquire them in the NATO countries have failed. Meanwhile, an old foe of Algeria, Morocco, has these systems. In addition, the Algerian side would not mind to sign a contract on deliveries of Russian fighters, but again at a bargain price.

However, the preservation of former relationship in the area of MTC should not lull Moscow. First, in the mid 1990s, Algeria began to think about diversifying the supply of arms from other countries, including France. Second, the development of MTC of Algeria and Russia has been adversely affected by the recent scandal with the supply of spare parts for MiG-29, when the Algerian side terminated the contact, explaining its decision by saying that Russia had allegedly supplied defective and already exploited parts. In this regard, Liberti-Algier hints: "Don't muddy the water; you may have to drink it."

Meanwhile, judging by the forecasts of the Algerian media, even in the case of reaching the agreement, Algeria intends to retain its controlling stake in the company, handing over only managing rights to VimpelCom.

And another unpleasant hint of the Algerians: "Algeria is no longer willing to serve a counter for the Russian goods." You can read this headline in the influential Algerian newspaper El Watan.

Algeria has recently adopted a five-year development plan for the country and needs $286 billion for its implementation. El Watan wrote that Ben Mouradi pointed out the need for both countries to do more than simple commercial transaction. The message is clear: Algeria no longer wishes to serve as a counter to foreign goods, including Russian ones. The government expects productive investment from the Russian companies. Instead, of course, they will have access to the markets. Ben Mouradi made it clear that there is room for Russian companies in Algeria only if they accept this condition. The water is tested, now we must wait for a response from the Russian side.

It is hard to say at the moment what the answer will be. But it can be assumed that Russia would not abandon a piece of expensive, but attractive Algerian pie. However, it is likely that Moscow will try to bring down the price.

With regard to energy projects, it will be difficult to strengthen Russian position in the Algerian market. The West fears that this will allow the Gazprom to dictate favorable price of gas, and Europe will be even more dependent on Russia in terms of energy.