From Russia to Cyprus, with love 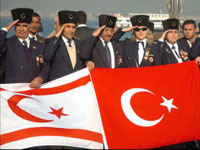 Russia will help to resolve the Cyprus problem. This was announced by Russian President Dmitry Medvedev during his official visit to the Republic of Cyprus. According to him, Russia's relations with Cyprus "have always been very good, spiritually close and based on mutual respect and friendship. Therefore, we hold similar positions on a number of issues. And we will continue to assist in resolving the Cyprus problem," said Russian President.

The issue has been around for decades. The island has been divided into Greek and Turkish parts since 1974. Then, the coup of "black colonels" occurred in Greece. The junta has announced the accession of Cyprus to Greece. In response, Turkey sent troops to the north of Cyprus on the pretext of protecting the Turkish population.

Since then, the northern part of the island is out of Nicosia's control. Its territory is controlled by the Turkish Republic of Northern Cyprus that is not recognized by anyone other than Turkey. Currently, the Greek Cypriots and Turkish Cypriots are in talks on reunification of the island still divided by the ceasefire line. In accordance with UN resolutions, the conflict must be resolved by creating a bi-communal federation. But as you know, the situation remains unchanged.

As we know, Ankara is very jealous of their interests in Cyprus and does not intend to yield to Nicosia and Athens. The relations between them are tense. How will the Turkish side react to the statement of the Russian President? Sergey Demidenko, an expert with the Institute of Strategic Studies and Analysis, commented on the situation for Pravda.ru.

"Turkey is interested in resolving the Cyprus problem and, therefore, the statement of Dmitry Medvedev in Ankara will be met positively," the expert believes. "The Turkish side is interested in this for the simple reason that without solving the Cyprus problem, it will not be allowed into the EU. In addition, now the Turkish leadership has adopted a strategy of building "smooth relations" with all its neighbors. Another thing is that technically it is difficult to resolve the frozen conflicts due to the fact that the Greek and Turkish interests are diametrically opposed. It is a conflict the settlement of which has been stretched for many decades".

In this connection, Dmitry Medvedev once again criticized the European and international organizations for the inability to effectively resolve conflicts in Europe. According to him, practical implementation of the new European security treaty he proposed on June 5, 2008 may rectify the situation.

The goal is to allow the old and prevent new conflicts in the Euro-Atlantic area. And Dmitry Medvedev has proposed to consolidate international law principles of "indivisibility of security," according to which no country or international organization will be able to pursue its interests at the expense of other organizations and countries.

While in Cyprus, the Russian President said: "Europe is made up of very different states, from time to time there are problems, conflicts, including such painful conflicts as the one in Cyprus. Which of the existing European institutions help to address these issues? It seems that all do it a little, but there is no result."

He explained that their recommendations and actions "are not effective and are not binding." Dmitry Medvedev said that European security is "fragmented" because some countries are bound by their own security with NATO, others with the European Union, while others seek to engage in "other blocks."

The Russian President criticized the Organization for Security and Cooperation in Europe as well. Dmitry Medvedev said that the "OSCE is not a universal platform for addressing serious issues that have a long history of painful and difficult relationship."

According to him, Russia knows this from its own experiences. Only a comprehensive agreement with clearly defined procedures, which includes all European states and alliances, and all international institutions, European institutions, which work on our continent, can rectify the situation."

At the same time, President Dmitry Medvedev strongly rejected the proposition that it is an "anti-NATO position." According to him, the issue is not about "what is directed against whom, but the fact that many European problems are not solved. "

The Russian head of state said that the idea of a new European security treaty is to be discussed with the leaders of European states and all stakeholders.

However, would the West agree with the Russian proposal? And what is it about? Dmitry Danilov, head of European Security Institute of Europe, answered these questions for Pravda.ru.

"In June of 2008, President Dmitry Medvedev announced the idea which for some time had no specifics. But in November last year the treaty has been drafted in Russia, and it stressed the fact that it is not an alternative to existing political institutions. In addition, the Russian side already has a clear understanding that this treaty cannot take place without the active cooperation with security institutions like NATO, OSCE, etc. Today Russia continues to seriously develop its provisions. One should not expect that the President will reveal all the details. Their development is administered by the Ministry of Foreign Affairs and relevant professional organizations."

"As for the purposes of this agreement, you should be aware that preventing new conflicts is much easier than resolving the existing ones.

I stress that a lot depends on the extent our European and especially American partners are interested in this and how deep the mutual cooperation will be. And now Moscow is awaiting the reaction of its foreign partners to the proposal. Otherwise, our suggestions stay just that.

Maybe this topic will be raised again in the end of November, at the NATO summit held in Lisbon, where the Russian President is also invited," the expert believes.