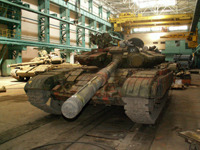 The Ukrainian defense industry, a competitor and partner of the Russian defense complex, may collapse in three years. Spokespeople for Ukraine's leading defense enterprises, as well as deputies of the nation's parliament, believe that the defense industry of Ukraine is about to fall apart.

The state of affairs in Ukraine's defense complex raises serious concerns with many experts. Many voiced their opinions on the subject at the end of August of this year, at the Ukrainian forum of defense industry. Indeed, the defense complex of the former Soviet nation received few orders in 2009 and lost the financial source for renovating production facilities.

The reforms of the defense industry in Ukraine was stopped in 2008, during Yushchenko's presidency. The situation has not improved after Viktor Yanukovych came to power. Only 20 percent of state-run programs for the development of the defense complex have been implemented during eight months of the current year. In 2010, experts say, the nation's defense industry will not receive any funds within the scope of the state order. In addition, in 2009, the state owed almost $400 million to the industry. The state order for 2011 is going to be even smaller.

The collapse of the Ukrainian defense complex will obviously exert highly negative influence on the country on the whole. Up to 3,000 enterprises employing nearly three million people are connected with the defense industry.

The current state of affairs in the defense industry prompts serious questions about maintaining the defensive capacity of the country.

"There is no army without military hardware. The hardware that we have in the army now was developed 50 years ago. It was developed for the wars that were conducted 30-40 years ago. Will army exist in Ukraine and does Ukraine need it? Will Ukraine has the scientific potential, high-tech jobs and a serious technological base?" The chairman of the parliamentary committee for national defense and security Anatoly Gritsenko said.

Many promising military developments in Ukraine have been frozen. For example, the project to build unique Sapsan missile complex exists only on paper. The reform of the nation's navy has been frozen too; the construction of new vessels was suspended over the lack of funds.

Ukrainian deputies believe that the government is supposed to support the defense order for 2010 and assign the extra $1 billion to support the industry in 2011. Otherwise, they say, Ukraine will not be able to order arms in three years.

The situation is not likely to change for the better. Ukraine's defense industry is not the only industrial branch that stands on the verge of collapse. The Ukrainian Prime Minister Nikolay Azarov said that the nation would need one trillion dollars to rescue the defense complex. It is hard to believe that the country will be able to find so much cash somewhere.

Ukraine's top officials intend to continue modernizing military hardware instead of building new weapons, at least before 2015. The Ukrainian administration acknowledges that the country does not have any funds for making new arms. It can be a way out for a short period of time, though.

However, the defense industry of Ukraine is capable of bringing the profit of up to $1.5 billion a year. Indeed, Ukraine can build state-of-the-art tanks, missiles and digital communication systems. The arms produced by Ukrainian defense enterprises successfully compete with foreign analogues, and Russia is not an exception at this point. Ukraine manufactures radars, air-to-air missiles, high accuracy means of destruction and other weapons.

Kiev inherited nearly a third of the space industry of the former USSR. Twelve of USSR's 20 types of intercontinental ballistic missiles were developed and manufactured in Ukraine. Zenit carrier rocket is probably the most famous one of them: it is the basic rocket in such international projects as Globalstar and Sea Launch. Cyclone, another carrier rocket designed for launching satellites into orbit, raises a lot of interest in foreign countries too.

Ukraine's aviation industry is the most competitive one. Antonov design bureau enjoys high international reputation. The ship-building industry is highly important as well: nearly 40 percent of all vessels used to be launched in Ukraine during the Soviet era.

Alexander Khramchikhin, deputy director of the Institute for Political and Military Analysis, told Pravda.Ru that the days of the Ukrainian defense industry are numbered.

"Its high export data were based on sales of old Soviet hardware. The Ukrainians were not producing much, nor were they investing anything in modernization. Unlike Russia's self-sufficient defense industry, the defense complex of Ukraine is doomed," the expert said.