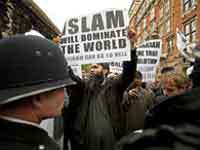 The trial on Europe's perhaps most controversial politician, Geert Wilders, 47, the leader of Holland's Party for Freedom, started in the country on October 4. The politician became known for his harsh statements about Islam and Muslims.

The politician has been charged with inciting religious strife. Prosecutors presented 70 pages of indictment based on five articles of the Penal Code of the Netherlands. Prosecutors claim that Wilders insulted Muslims when he compared Quran to Adolf Hitler's Mein Kampf and urged to put an end to the "Islamic invasion." If found guilty, the leader of the Party for Freedom will face the term of 12 months in prison and a 10,000-euro fine.

The general public inside and outside Holland shows immense interest in the trial. Some experts say that Wilders will use the court room to promote his ideas, which many in the country consider as extremist.

Russia Today: Hindus and Muslims on edge over religious strife

Wilders stated that the charges brought against him were unfounded because they contradicted to the fundamental principle of Holland and the entire European Union - the freedom of speech.

Wilders said that he would like 18 witnesses to appear at court. One of them is Muhammed Bouyeri, of Moroccan origin, who killed director Theo van Gogh six years ago (the director made a documentary about hard living conditions of women in the Muslim world). The politician's lawyer is certain that Bouyeri was guided by Quran when he committed his crime.

As soon as the court session opened, prosecutors set forth their objections against Bouyeri's appearance during the trial claiming that the witness was not a competent theologian. The judges decided to delay the hearings before February 3.

Why does the trial attract so much attention? The relations between native residents and nationals of Muslim countries have become one of the most important issues in Europe recently. Holland shares the first place with France on the European continent on the share of Muslim citizens in the population. Muslims make up nearly 10 percent in the country of tulips. The mayor of the country's second largest city, Rotterdam, is Akhmed Aboutaleb, a Moroccan.

Most Muslims are law-abiding citizens. However, some of them propagate Islamite ideas in mosques. One may also recollect the story, which Wilders referred to - the murder of Theo van Gogh (a descendant of the outstanding artist). The above-mentioned Mohammed Bouyeri did not like the fact that the director made a documentary about the role of women in the Muslim world.

That crime made Geert Wilders famous.

"There might be moderate Muslims, but there is no moderate Islam. Islam will never change, because it is built on two rocks that are forever, two fundamental beliefs that will never change, and will never alter. First, there is the Quran, Allah's personal word, uncreated, forever, with orders that need to be fulfilled regardless of place or time. And second, there is al-insal al-kamil, the perfect man, Muhammad the role model, whose deeds are to be imitated by all Muslims. And since Muhammad was a warlord and a conqueror we know what to expect. Islam means submission, so there cannot be any mistake about it's goal. That's a given. It's fact," he said in February of 2009.

Here is another curious statement:

"How low can we go in the Netherlands? About my prosecution, The Wall Street Journal noted: "this is no small victory for Islamic regimes seeking to export their censorship laws to wherever Muslims reside". The Journal concluded that by The Netherlands accepting the free speech standards of, "Saudi-Arabia", I stand correct in my observation that - I quote - "Muslim immigration is eroding traditional Dutch liberties".

In 2006, Wilders founded the ultra-right Party for Freedom, whose primary slogan was the ban for the immigration of Muslims to Holland. The party won six percent of votes and nine seats in the parliament during the elections in 2006. Three years later, the party won the support of 16 percent of voters at the elections to the European Parliament. In June of this year, Wilders's followers obtained 24 out of 150 deputy mandates.

In 2008, the Dutch politician unveiled his short film, Fitna, in which he compared Islam with Nazism. Spokespeople for Muslim organizations filed a lawsuit against Wilders; no central TV channel in Holland dared to air the controversial flick. However, the documentary triggered massive discussions all across Europe, but Wilders avoided punishment.

The current trial shows that the issue of relations between the native population and immigrant Muslims is a highly sensitive question for Europe, even if the ultra-right politician goes too far in his public statements regarding the matter.