As the athletes from around the British Commonwealth gather in New Delhi, revelations have been made of plans by a Naxalite terrorist group to perpetrate terrorist attacks against civilians at the Commonwealth Games (October 3 to 14). Three leaked documents allegedly from the Indian CBI reveal the concern of the authorities. 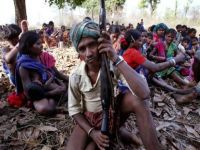 According to Pakalertpress.com, three top-secret documents leaked to PKKH from the Special Crime Unit of the Indian Central Bureau of Investigation (CBI) in New Delhi identify two militant groups which aim to carry out terrorist attacks against the athletes.

Marked "Top Secret" and "Strictly Confidential" the documents bear an address and a stamp of the Indian CBI. The first declares that a militant group was brought under observation in mid September and aims to "supply explosives, gelatin sticks and detonators to the Naxalites and structured payoffs transactions for attacks on CWG, New Delhi including foreign teams and officials".

The second document PKKH (Pakistankakhudahafiz.com) states that the terrorist group Mars, along with a Naxalite group, is aiming "to take over the Commonwealth games". The third confirms the approximation of Mars to the Naxalites and states that "cross-verification is necessary".

While the veracity of the documents and the affirmations contained in them have to be researched further, the timing is ominous, as athletes from across the world gather for the Games. This comes as a sequel to the incident on August 27, when 163 trucks laden with explosives (detonators and gelatine sticks) went missing en route from Rajasthan to Chanderi and Sagar in Madhya Pradesh.

Pakalertpress states "Both companies are owned by Jaikishan Aswani, who has close links with extremist Hindu militant groups" adding that "On Tuesday, September 21, an Australian television news crew managed to enter the main games arena carrying a suitcase with an explosives detonation kit without being stopped". They were carrying enough explosives for 200 explosions.

PKKH quoted an unnamed Indian security official as saying "This new information is absolutely devastating since we just do not know enough at this stage to be able to confidently reassure the public that the games will go on without incident. All we know is that there are people intent on killing the foreign nationals and that they have the means to do so. There is a serious amount of explosives and detonation kits channeled into Delhi specifically for these games".

The Naxalites are Maoist rebels operating in Eastern India, drawing their support from the poor agricultural populations.