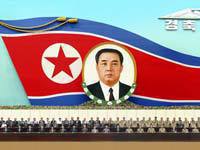 Democratic People's Republic of Korea is on the brink of a historic event. In a week, the country will hold the first in 30 years conference of the Korean Labor Party, where the transfer of power from the "Great Leader" Kim Jong Il to his youngest son, Kim Jong-Un, will likely be announced.

The talks about preparation for the grand event started in the beginning of August. The Conference where a new party leadership will be chosen was to be held back in early September. However, it was postponed. South Korean sources immediately circulated information that the reason was poor health of Kim Jong Il. It is hard to say whether it is true or not. North Korea is too closed of a country to be certain about such things.

In recent statement, the North Korean agency KCNA reported that delegates to the Congress, who "have demonstrated patriotism and support for the party and the revolution" have been already selected.

Whatever it is, the authorities do not hide the fact that they intend to prevent the recurrence of "unfortunate" experience of former socialist countries. According to the general line of the WPK, the revolution cannot be completed during the lifetime of one generation. And for the continuity of the course (according to the idea of North Korean leaders) it is best to transfer the leadership from father to son.

North Korea is the only example of "communist monarchy" in the world. As we know, Kim Jong Il became heir to his father, Kim Il Sung, in 1994. Preparation for the transfer of power in the previous case was done in stages.

Back in 1980, Kim Jong Il was elected member of the Political Bureau of the Party Central Committee, secretary of the Central Committee and a member of the Central Military Committee of the Party. The media began to praise his accomplishments. Two years later, he became a deputy of the Supreme People's Assembly. According to some reports, during the lifetime of his father, since the early 1990's, Kim, Jr. actually ran the country.

At least, he was in charge of the work of intelligence. For example, he was accused of organizing the terrorist attack in 1983 in Burma, which killed 17 officials from South Korea, as well as the bombing of a South Korean airliner in 1987, which killed 115 people. However, Kim Jong's Il involvement has not been proved.

Foreign analysts say that one of the most probable candidates for the role of the leader of "North Korea's nation" is the younger son of this country's leader, Kim Jong Un.

The question of succession has been raised regularly since mid-2008. It was then that the Western media have started to exaggerate the issue of the health of Kim Jong Il. The fact is that according to South Korean intelligence, he suffered a stroke last month.

He managed to graduate from the International School in Bern. However, he rarely attended lectures, preferring to study at home. He dedicated more time to basketball and the North American National Basketball Association competition.

An interesting detail: Kim Jong Un always dined in restaurants, accompanied by the North Korean ambassador to Switzerland Rea Chola, who was considered a manager of a secret treasury of Kim Jong Il.

But as soon as Kim Jong-Una turned 20, "the ruling Dad" brought him back to the DPRK. He might have done it to protect him from excessive pernicious influence of the Western lifestyles. And from that moment, everything that had to do with Kim Jong-Una was kept secret. Even the intelligence could not get his picture and had to use a sketch.

However, when talking about a possible successor, Kim Jong-Un's young age seems confusing. Can we say with confidence that he will become the new North Korean leader?

In his commentary to Pravda.ru, Vladimir Khrustalev, an expert on Korea at the Maritime University of Admiral Nevelsky, said:

"It is very likely that this conference will address the question of Kim Jong's Il successor. However, it is unlikely that this issue will be resolved unambiguously. And I do not rule out that the process could stretch out over time. And this does not mean that the new leader will be Kim Jong Un. Even if he is called so, most likely, he will be only a figurehead, while someone else will be a leader. He is too young for such a high role.

All North Korean political elite are of mature age. And most likely, they will make the second person in the administrative apparatus of North Korea, Chung Sung Taek, the real leader. This is an experienced official who has been consistently taking various management positions since 1972, has consistently gone through all leadership stages. And this is the best figure out of those available in the North Korean "arsenal." Moreover, he holds a dominant position in the State Defense Committee of the country. This is the body that, since the early 1990's, has been playing a leading role in the state. Most likely (even after the "election" of a new leader) North Korean "elders" will run the country collectively, as it happened to Russian Politburo in the last years of Brezhnev's leadership.

So do not expect any drastic changes of the course after Kim Jong Il is gone. Anyway, in the beginning, the country will move along the previous course by inertia," the expert is convinced.