UK: Meet the new leader of the Labour Party

Ed Miliband, 41, is the new leader of Britain's Labour Party, beating his brother, former Foreign Secretary David, in the final round of voting, having wooed the Left, promising to unite Labour after years of covert division between Blairites and Brownists, promising tax rises over public spending cuts and earning the label "Ed Red". 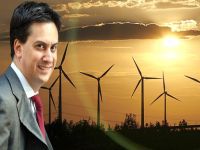 However, Ed Miliband understands that radicalism and British politics do not mix and whereas in the European Union there are countries like Portugal with around 20 per cent of the vote deposited in parties to the left of the Socialists (center/center-right) in Britain such would be impossible. The two Communist Parties (PCB and CPGB) do not between them have a single Member of Parliament due to the first-past-the post electoral system and due to the fact that their party membership is counted in the hundreds, rather than the thousands, although this does not reflect the influence they enjoy in diverse sectors of society and formulation of policy.

Therefore Ed Miliband's stance during Labour's internal election campaign as a man of the Trade Unions (many will remember the times when they brought the country to a standstill in the 1970s) will have been little more than electioneering, the more so because he rejects the nickname "Red Ed" and declares upon announcing his victory that "It's not about some lurch to the left, absolutely not". With Ed Miliband, Labour remains in the center.

So where does the Red Ed label come from? The Miliband brothers are sons of the Marxist theorist Ralph Miliband and Ed's support came mainly from the Trade Unions and affiliated societies during the election campaign, whereas his brother David has marginally more support among the MPs, the Members of the European Parliament and party membership.

Ed Miliband's background, coupled with his position on taxing the banks more and having a higher income tax rate of 50 per cent will have shaped the writings of the opinion makers who baptised him. However, after winning the leadership contest yesterday he has declared loud and clear that his platform is very much at the center of British politics.

Where does he come from?

Born in 1969, he graduated in Philosophy, Politics and Economics from Oxford University and went on to get a Master's Degree in Economics from the London School of Economics. Beginning as a researcher for the Labour Party, as speechwriter for Harriet Harman, the interim leader of Labour who he replaces, he was appointed Chairman of Her Majesty's Treasury's Council of Economic Advisers, working closely with Gordon Brown. Since 2005, he has been MP for Doncaster North and from 2007 to 2010, he was appointed Chancellor of the Duchy of Lancaster, Minister for the Cabinet Office and then Secretary of State at the Department of Energy and Climate Change.

On Saturday September 25 2010 he was announced leader of the Labour Party after narrowly beating his brother David in the final round after the elimination of Ed Balls, Andy Burnham and Diane Abbott.

Where is he going to?

No longer described as the brother of the former Foreign Secretary, Ed Miliband is the leader of the Labour Party, constituting the main opposition to the ConDem alliance between Prime Minister David Cameron's Conservative Party and Deputy Prime Minister Nick Clegg's Liberal Democrats.

With the Conservative-Liberal Alliance vowed to stay the five-year course, Ed Miliband has time to define his party and as leader of the opposition, find the weak links in the Government, where flashpoints are bound to occur among the Conservatives (where leader David Cameron represents the Left Wing of the Party, having many as yet silent critics to his right) and the Liberal Democrats (where leader Nick Clegg represents the Right Wing of the Party, having many critics to his left). While the two leaders make sexy-looking bedfellows, there are many knives behind the curtains, ready to swoop if the draconian budgetary policies of Finance Minister (Chancellor) George Osborne begin to cleave social divisions and strife in an already shaking socio-economic reality.

In the coming weeks his shadow cabinet will be formed and Labour will take shape. But those who expect it to veer to the left are very much mistaken.