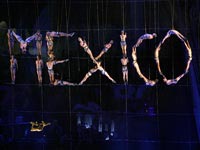 Mexico has recently celebrated 200 years of independence. Some members of the ruling National Action Party decided to celebrate the glorious anniversary in their own way by proposing to rename the country.

The local Senate received a bill authored by a member of the ruling party Guillermo Tamborrel. The bill is designed to change the official name of the country from the "United Mexican States" to Mexico. The document is already signed by 47 people who include not only the same party members but the opposition from the environmental Green Party.

"There is an undeniable fact that there is a country called Mexico, it lives in our hearts, in our history, our culture, traditions and institutions. Abroad and within the country we are known as the Mexicans, our nationality on the birth certificate is Mexicans, but Mexico, as the nation-state does not exist in our constitution," reads the text of the bill.
Then Tamborrel engaged in listing evidence in favor of his proposal. The country uses such names as Bank of Mexico, National Autonomous University of Mexico, yet, it is virtually impossible to find something that contains "the United Mexican States."

Russia Today: USA divided into 'us' and 'them'

The senator explained that when in 1824 the authors of the Constitution of the country claimed the title United Mexican States, they just used a calque from a similar name of its large northern neighbor. "When no one, including us, uses the name United Mexican States, to keep it official is just imitate the neighboring country (USA). The Republic can exist in the federal form without the words United States," considers Tamborrel.

It must be said that the Senator was not the first one who proposed to delete the phrase "United States" from the name of Mexico. In 2003, a similar initiative was proposed by none other than Felipe Calderon who became the President three years later. However, the proposal received support neither in parliament nor in government, nor from then-President Vicente Fox.

And now there is a new attempt. Given the fact that Tamborrel represents the same party as the President, we can assume that the real initiator of the amendment is Calderon. It is possible that the President had decided to test the reaction of society and political elite with the assistance of his colleagues in the party.

Would it be possible to change the name of the country in the near future? So far, this is only a bill that should be discussed and adopted. It is unlikely that the renaming is among the priority issues in Mexico. After all, millions of its inhabitants, tired of poverty, are trying to get into the "real" United States by hook or by crook. Part of its territory is actually controlled by drug lords.

Due to the unfavorable political and crime situation, the celebration of the 200th anniversary of independence had to be cancelled in six states (out of 31). In addition, until September 17, alcohol was partially banned throughout Mexico. It could not be bought in stores, only ordered in cafes and restaurants.

110-million Mexico is the second largest country in Latin America (after Brazil) in terms of population and territory. Argentina has three times smaller population, Venezuela - four times smaller, and Cuba - ten times fewer people. Yet, their leaders are known to the entire world. And Mexico is barely represented on the international political arena.

Objectively, Mexico has everything to change this state of affairs. Today the country is among the three largest independent oil exporters (along with Russia and Norway). Native American civilizations existed here even before our era. The empire of the Maya and the Aztecs lived on the territory from the Pacific to the Caribbean back in the days when there was no trace of the United States.

There are reasons for the revision of the official name of the country. However, just the fact that Mexican States will become simply Mexico will not change the position of the country in the world. If President Felipe Calderon and his colleagues in the party and the government do not propose any major international initiatives, the country will remain just a "southern neighbor" of the United States.

However, changing the name of the country, especially removing the part "United States" is a good opportunity for Mexico to be remembered far beyond the Western Hemisphere. In addition, there is the 200th anniversary of independence, and in two months there will be a 100th anniversary of the Mexican Revolution. Anniversaries are an excellent occasion to remind others that your country is a large and heavy power; they just need to be used properly.