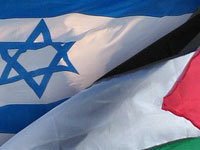 On September 13, representatives of the warring parties met in Sharm el-Sheikh. To begin with, Netanyahu and Abbas held talks with Egyptian President Hosni Mubarak. Then the leaders of Israel and Palestine were talking in the presence of U.S. Secretary of State Hillary Clinton. After the meeting the representatives of Egypt and the United States spoke of a constructive attitude on both parties. However, no particular results had been achieved.

The participants had differences about the agenda. Israel demanded that the Palestinians recognize the Jewish state it, and intended to focus on security issues. The Palestinians insisted on discussing the matter of the borders of their future state and the status of Jerusalem.

Foreign Minister of Egypt Ahmed Aboul Gheitm, who spoke to the media, acknowledged that the breakthrough has not happened. The Egyptian minister said that so far he could not speak about optimism, and could only talk about serious negotiations which affect all of the issues raised in accordance with the approved agenda. He diplomatically added that there was hope for a timely establishment of the Palestinian state.

Aboul Gheit said that President Mubarak urged the Israelis to extend the moratorium on the construction of new Jewish settlements in the West Bank, which expires on September 26. However, Netanyahu did not provide a clear answer.

U.S. special envoy in the Middle East, George Mitchell was even briefer. He said that the U.S. believed that it makes sense to extend the moratorium on construction of Israeli settlements, as negotiations are constructive. However, he declined to assess the discussion concerning the construction of settlements.

The representatives of the opposition did not give up their principle position. Israeli Government spokesman Ofir Gendelman said that they were not going to abandon the negotiations under any circumstances, despite the differences.

However, he further said that there was no agreement between the parties. According to Gendelman, Israel will not extend the moratorium on the construction of settlements, as required by the Palestinians. And he called for the opposite side not to use the issue of settlements as a pretext for derailing the talks.

In his turn, representative of the Palestinian Government Saeb Erekat also expressed readiness to continue negotiations. Yet, he made it clear that the Palestinians continue to demand curtailing of Israeli settlement activity. Sami Abbas, Netanyahu and Clinton have not appeared before the cameras.

Perhaps, the main understanding reached in Sharm el-Sheikh, was the agreement of both parties to meet in Jerusalem, at the residence of Israeli Prime Minister. On September 15, the talks continued there. Mahmoud Abbas for the first time in several years crossed the threshold of this building. Many would consider it a good sign.

"Today I returned to this house after a long period of absence in order to continue talks and negotiations and with the hope of reaching eternal peace in the entire region and especially peace between Israel and the Palestinian people," Abbas wrote in the book of honorary guests.

Then a new round of negotiations with the participation of Hillary Clinton began. They were held behind closed doors, no details were disclosed. The Israeli newspaper Haaretz, referring to a member of the Israeli delegation, said that Netanyahu refused to stop construction of Jewish settlements. At the same time the prime minister of Israel called on Abbas not to disrupt the talks. There is no information about the reaction of the Palestinians, but it is unlikely they were delighted.

Talking to the media after the negotiations, the U.S. special envoy Mitchell tried to assure those present that Netanyahu and Abbas did not sweep the complex issues under the carpet. He said that they dealt with the issues that lie at the heart of the Israeli-Palestinian conflict. He added that the two leaders did not leave the complex issues for the end of the talks, which is a sign that they believe the peace is possible.

Meanwhile, representatives of the Islamic movement Hamas criticized the very fact that Abbas sat down at the negotiating table with Netanyahu. Mahmoud al-Zahar, one of the leaders of the movement, said that resistance was the only solution to defy the invaders. He added that this were neither the first nor the last negotiations held in favor of the Israeli occupation.

He stressed that no agreement can be accepted without addressing the issue of Palestinian refugees, but the opinion of the occupiers is clear: they will not take any decisions. Israel is taking without giving anything in return, he emphasized.

It is not clear when the new round of negotiations will be held. However, the American mediators have already said that next week consultations on a possible meeting place will commence. Whether the talks result in anything remains a big question. So far, no breakthrough has been achieved.

Will the next meeting be held at all? Next week Israeli freeze on settlement construction expires. The Palestinians have repeatedly threatened to halt talks if Israeli settlement activities resume. Most likely, they will have a reason to do so.