France took an important step to ensure that the country officially bans wearing of burqa. Late on September 14, the French Senate almost unanimously approved the bill. 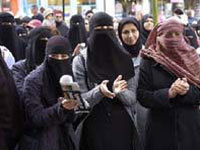 The law banning wearing of traditional Muslim women's clothing that hides the face became one of the most discussed and controversial in modern French history. The initiative was suggested by authorities last year. They referred to numerous complaints from indigenous French, who fear "faceless" female figures.

In January of 2010, the National Assembly (lower house of parliament) established a special commission to study the adoption of the bill. It concluded that "wearing the full hijab (the French legal parlance for burqa) is a challenge to our republic."In April, President Nicolas Sarkozy has ordered the parliament to draft the law.

According to the document, France suggested to completely ban wearing of burqa in public places. Women who violate this requirement were to be punished by a fine of 150 Euros and a course of lectures on the basics of the secular foundations of the French Republic. Men who force women to wear burqa would face up to a year in prison.

"These clothes are degrading to women. We cannot allow our country have women who are prisoners to burqa, separated from public life, deprived of self-determination. This has nothing to do with how a woman's dignity is understood in the French Republic," Sarkozy said, introducing the bill. According to him, wearing of such garments is a challenge to the secular principles of the country.

From a practical point of view, the issue seems to be not very serious - the number of women wearing burqa does not exceed two thousand in France. But the very fact of its ban could be interpreted as an attack on Islam by five million Muslims in the country. As soon as the bill went to the National Assembly, a heated discussion started.

Opponents of the document indicated that it is in conflict with basic human rights. Men have the right to choose what clothes to wear. They also feared that disaffected Muslims throughout the country will organize pogroms or, God forbid, terrorist attacks. Proponents talked not only about preserving the secular foundations, but also the fact that one can carry anything under the burqa, for example, a bomb.

Incidentally, there was no unity among the Muslim religious leaders. Some of them made it clear that the foundations of the state must be respected. Others strongly protested.
The discussion of the bill in Parliament was not easy. Political opponents accused Sarkozy of attempts to improve his ranking through fomenting of anti-Muslim passions. But opinion polls showed that 83 percent of the population supports the President. This means that the head of the state met the aspirations of the people.

In July, the National Assembly approved the bill by an overwhelming majority. Then it was referred to the upper chamber, the Senate. The voting was scheduled for September 14. There were no problems - 246 senators voted in favor and only one - against. The bill was also supported by the representatives of opposition parties. If no one will challenge it in the Constitutional Court, six months later the ban on wearing burqa will officially take force.

Why were the authorities so persistent about adopting the document, and brought it to implementation? It's not only that there are fears of Islamization. France is a country where separation of religion from the state is regulated more strictly than in any other state in the world. The French republic is secular, it is written in all of the fundamental laws of the country. And conspicuous religious symbols in fact are contrary to its foundations.

Sergei Fedorov, an expert of the Institute of Europe RAS, commented on the latest decision of the French Senate and the political struggle around the adopted bill for Pravda.ru.

"Introduction (or rejection) of the ban on burqa means little in practical terms. Two thousand women are too little for the 60 million-country. No Muslim insurrection or civil war will occur in the country after the law enters into force. As it never happened before, after numerous riots organized now and then by young people from Arab families in the suburbs of major French cities.

The fact that the President and Parliament still decided to accept the measure has several explanations. One of them is the desire to improve Sarkozy's rating that recently fell. This may help him win the sympathy of extreme right-wing voters who previously supported the leader of the National Front, Jean-Marie Le Pen. Two years later, those voices can be very beneficial for him in the presidential election.

However, Sarkozy cannot be accused of political inconsistency. Even when the President served as Interior Minister, he proved himself as an ardent champion of preservation of secular foundations against illegals. And now, when he is the head of state and has political leverage for the adoption of the law in his hands, he used it.

Another point is the unity on this issue dominant in the French society. It is essential to preserve the secular foundations of the republic. If the opposition Socialists and Communists contest this matter in the Constitutional Court, they will do so only in opposition to Sarkozy. Their deputies and senators voted in favor of the law, their constituents support the restrictions on burqa.

Finally, the third point. By adopting such a law, France has shown that it is not going to follow the path of Anglo-Saxon world that made a bet on the coexistence of people of different backgrounds and religions. People coming into the country must adapt to local traditions, and not vice versa. The authorities gave a signal to all wishing to obtain a French passport (primarily from among the inhabitants of North Africa) that they are required to accept secular values of the republic."