America fed up with Europe? 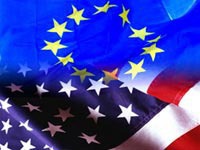 Recently, the American publication The National Interest published an article entitled Departing Europe written by Assistant to President Ronald Reagan Doug Bandow. Strangely enough, the material with such a headline written by an influential and respected man in the U.S., went virtually unnoticed. And not without a reason.

The National Interest is no ordinary publication. Its honorary chairman is former Secretary of State Henry Kissinger, and the owner is one of the most famous American political analysts Dimitri Simes. The authors of the publication were such people as philosopher and singer of American hegemony, Francis Fukuyama, Historian-Sovietologist Richard Pipes, and the creator of the term Holodomor Robert Conquest.

As a rule, it reflects the point of view of ideologues of the Republican Party on major world events. The texts published in the journal can provide a general idea of what the Republicans are going to do in foreign policy if they are in power.

For example, the text of Ariel Cohen of March 19, 2001 on the Ukrainian issue was a significant material in this respect. On the one hand, it contained recommendations to the U.S. government on this issue. On the other, three years before the Orange Revolution, the author outlined a set of goals for pro-Western non-governmental organizations in Ukraine. Everyone remembers what happened a few years later.

It was the time when the Ukrainian President, Leonid Kuchma, disillusioned by the West, began thinking about the resumption of mutually beneficial cooperation with Russia. The government of Viktor Yushchenko has not yet sent in its resignation, but fundamentally, this issue has been resolved. On April 26, 2001 Yushchenko, who the West has already placed its bet on, was dismissed because of the parliamentary vote of censure of the Cabinet.

There will be no great exaggeration to say that the ideology of The National Interest is often a concentrated expression of the current mood of the American establishment. This is also reflected in the editorial policy of the newspaper. For example, The End of History? by Francis Fukuyama was published here in 1989. The author then kept talking about the triumphal victory of liberal democracy and the imminent establishment of peace and conflict in the American way.

Time has passed, and today the attitude of the American elite has changed dramatically. If during the collapse of the Soviet Union and in anticipation of "color revolutions" in former Soviet republics the mainstream slogan was"We won! We can do anything," now it is more like: "Do we need it?"Make your own judgment:

"That means withdrawing American troops and leaving NATO to the Europeans. Continental defense should be the responsibility of the EU, essentially NATO without the NA (depending upon what Canada would choose to do). If member states prefer to preserve their expensive and expansive welfare states, then so be it," thinks once one of the most influential people in the U.S.

Perhaps an article in The National Interest is a provocation meant to incite a reaction from Brussels in line with "Come back, I will forgive you!" and encourage the Europeans to double their allocations for military needs and actively participate in the unpopular NATO operations in Afghanistan. But it is possible that it is something else. It may not be so much conservative but rather realism, sober calculation, an attempt to objectively assess the situation. While the world economy was growing, globalization was beneficial, especially for the United States. Since the beginning of the crisis the situation has changed.

For Washington, it is time to conduct an audit of traditional attitudes and re-evaluate what is right and what is wrong, what is profitable and what is not, what is beneficial and what is not. Until relatively recently, the U.S. presence everywhere promised the United States dividends. Now "hyperextension" of the American Empire at every point of its external presence promises (in addition to domestic difficulties) additional problems.

It is possible that such an idea (the departure from Europe) appeared in the U.S. expert community not for the sake of provocation. And now it is under serious consideration, taking into account all the pros and cons. In the end, the United States has been present in Europe for only about half a century. Who promised it will last forever? Suppose, the White House weighs all the pros and cons and decides that the U.S. would be better off becoming a normal American government between Canada and Mexico.

The only question is whether this idea will be put into practice by the Republicans, if two years later their president is back in the White House. Or will they continue implanting "democracy" through "color revolutions" by tanks, aircraft carriers and planes? We shall see.