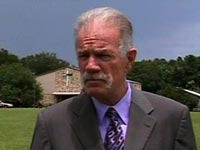 A few days before the anniversary of the terrorist attacks of September 11, 2001, a grand religious and political scandal broke out, whose consequences are difficult to predict. All because of the big words spoken by a 58-year-old evangelical minister Terry Jones of the small town of Gainesville in Florida.

The pastor made a statement that on September 11 he will honor the memory of the victims of three terrorist attacks that occurred nine years ago by the burning of the Quran. According to Jones, the Quran is evil precisely because its content is pushing Muslims for aggressive behavior. The pastor believes that the act should be a warning to "radical elements of Islam." He also urged to observe September 11 as the "International Day for the burning of the Quran."

Strictly speaking, the community where Jones serves as a spiritual mentor has started anti-Islamic propaganda on the Internet some time ago. They invited people to send them copies of the Quran in order to burn them on September 11. At earnestly they discussed the best way to burn the Holy Book of Muslims.

Indirectly, the initiative of Jones was supported by the vice-governor of Tennessee, Ron Ramsey. He suggested that the federal government denies Muslims the right to pray freely in the United States. The official argued that the country is threatened by Islam, which, according to Ramsey, may be not a religion but a sect or a way of life.

"Theological statements" of the Republican governor, to put it mildly, are very controversial. However, they did not cause much noise against the background of possible burning of the Quran. Jones was even "luckier." As soon as Internet users learned of his intentions, the scandal broke out. The leaders of the country had to comment on the actions of a simple pastor.

Of course, Jones's initiative has not received approval of Washington. Secretary of State Hillary Clinton called it "inexcusable and disgraceful." Attorney General Eric Holder was less diplomatic, and described the pastor's venture as "dangerous and idiotic." State Department spokesman Philip Crowley said that such action is contrary to the American principles. "This is not the American way. This action does not conform to the principles of religious tolerance and religious freedom," he said.

The commander of coalition forces in Afghanistan David Petraeus proceeded to explain the dangers that Jones may pose to the U.S. troops in that country. "The burning would endanger troops and images of the burning of a Quran would undoubtedly be used by extremists in Afghanistan - and around the world - to inflame public opinion and incite violence," he said. White House spokesman Robert Gibbs made a similar statement saying that such actions will not go unnoticed in places such as Afghanistan, where US troops could be harmed.

Petraeus and Gibbs were absolutely right. Back on Tuesday, rallies were held against the intention of Jones in several Muslim countries. In Kabul, people chanted slogans "Death to America!" and "Long live Islam. " It is good that the number of attacks on American military has not yet risen. If it does happen, hardly anyone will be surprised.

Particularly noteworthy was condemnation of Jones's intentions by NATO Secretary General Anders Fogh Rasmussen. This politician knows what can an insult of Muslims cause. Five years ago, when he was the prime minister of Denmark, his country had published scandalous cartoons of the Prophet Muhammad.

What happened afterwards was seen by the entire world. Crowds of indignant Muslims in different parts of the world burned Danish flags and destroyed Danish embassies. Some states (e.g., Iran) closed their embassies in Copenhagen. But the cartoons are not the burning of the Holy Book. In the case of abuse of the Quran protests could be of even larger scale with even more unpredictable consequences.

Jones's intentions were condemned by the representatives of the World Islamic League. Its secretary general Abdullah bin Abdul Mohsen Al-Turki regarded them as "a manifestation of extreme anger and arrogance, leading to the incitement of hatred between people." In his opinion, such action will not only insult 1.5 billion Muslims, but also will be a flagrant violation of international law. Al-Turki called on U.S. authorities to prevent the burning of the Quran.

The zeal of the pastor was not appreciated by Christian organizations either. Especially noteworthy is the fact that his intent was condemned by the U.S. National Association of Evangelicals, to which the community of Jones belongs. According to Christian religious leaders, the burning of the Holy Books is completely unacceptable.

However, Jones is not going to abandon his idea. On Wednesday, he said that it was necessary to let the Islamic radicals understand that Americans will not be intimidated. The pastor said that he has received over hundreds of threatening letters from Muslims, and he is forced to carry a gun.

It is obvious that Jones' action will not add credibility to the United States. Relations with the Muslim countries can be seriously damaged. And the pastor himself will be like the Taliban, who decided to blow up an ancient statue of the Buddha as "contrary to the precepts of Islam" nine years ago. That rally was condemned by the world community, including Iran and Muslim religious leaders. It was then that the Taliban has become the embodiment of the aggressive and dangerous darkness for the entire world.

The story of Jones revealed another thing that relates specifically to the U.S. It turns out that in the country that is considered a citadel of political correctness and respect for the rights of believers, the reality does not match the talk. After all, the pastor found a number of followers.

Incidentally, priests in America do not always have a full religious education, as in European Orthodox or Catholic countries. Many American Protestants have spiritual mentors who are simply respected members of the community, and the sermons can be read not in the church, but somewhere in a school gymnasium. And yet somehow intolerant of other religions Jones became a pastor.