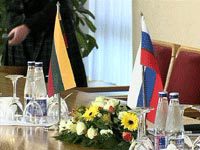 The situation around the Russian language and the position of Russian-speaking population in the Baltic States has long been the focus of attention of the politicians and the media. Until now, significant issues in this area had been observed in Latvia and Estonia. However, recently the problem has become acute in Lithuania, albeit in the most unexpected form.

Recently, Margarita Drobiazko, repeated winner of European Championships and World Figure Skating, participated in an entertaining show on a Lithuanian television channel. Being a Russian citizen by birth (although she competed on behalf of Lithuania, along with her partner and husband Povilas Vanagas), she chose to express her thoughts in Russian, not Lithuanian. The host was trying to interpret her words into Lithuanian for some time, but at some point has stopped.

It must be said that the producers of the program made a mistake. During the years of independence, Lithuania has grown a whole generation that does not understand the Russian language. They should have thought about simultaneous interpreting in advance. It was an embarrassing mistake. However, the country's leading newspaper Lietuvos rytas recently published an article where Drobiazko and the show producers were accused of political and linguistic subversion.

"Can you imagine our country operating a shopping center where people cannot speak Lithuanian? Or the police station whose employees talk to you in Russian? Are you saying that after 21 years of independence, Lithuania has no places where they do not care about the State Language Law? You are mstaken. This place is the television," resents the "nationally-conscious" author of the article Virginijus Michyulis.

"Maybe we should not be too hard on Drobiazko. The figure skater, apparently, is not very apt in languages. Neither her coach nor husband taught her the Lithuanian language. But there are some people who have been living in Lithuania for over ten years or even decades, still unable to connect two Lithuanian words together," exclaims the author of the article.

Swedish entrepreneurs who own the channel got their fair share of criticism as well. "Perhaps, the Scandinavians volunteered to teach us the Russian language? After all, 20 - 30-year-old people today are often fluent in several foreign languages, but cannot speak Russian," concluded the author. From his tone it was evident that lack of knowledge of the Russian language is considered a valor by the young Lithuanian.

Given the fact that this publication is closely linked with many leading politicians and businessmen of Lithuania, some representatives of the Russian community in the country thought it was not a lone voice of the nationalist, but an outspoken call for tighter language policy. The controversy surrounding usage of the Russian language on the Lithuanian television suggests a necessity of a closer look at the situation with the Russian-speaking population in this country.

There are not that many Russians in the country. According to the 2001 census, they accounted for six percent of the population (the third largest ethnic group). There are seven percent of Poles in Lithuania, and 83% of Lithuanians. For comparison, the Russian-speaking population of Estonia is approximately 30 percent, and Latvia - 40.

The situation with Russians in Lithuania is better than in its Baltic neighbors. There are no infamous passports for "non-citizens" here; Russian schools are not forced to teach most subjects in the official language. The Russian media is not forced to broadcast lion's share of time in Lithuanian (as was recently decided in neighboring Latvia). There are no "language inspections," like in Estonia, that enforce that in Russian schools 60 percent of subjects are taught in Estonian.

However, the aforesaid does not mean that there are no Russian-related problems in Lithuania. In the years since the Soviet Union collapse, two-thirds of Russian schools had been shut down. Of course, there is an objective explanation - many former Soviet officers and their families have left for Russia, other Russian-speaking people left for the West in search of a better life. However, the number of Russians in Lithuania within 20 years has not decreased by as much as three times, as the number of Russian schools, but by less than 50%. This is something that the author indignant about the Russian language on TV forgot to mention.

One may argue that the Vilnius University has the department of the Russian language; the city has a working Russian theater funded from the state budget. Yes, this is true. However, before the collapse of the Soviet Union, Vilnius universities were teaching in Russian, but now they do not. The country has no branches of Russian educational institutions. Therefore, Lithuanian Russians cannot pursue higher education in their native language.

The situation in the media seems to be more favorable. There are half a dozen of Russian publications in the country, as well as radio stations broadcasting in Russian. However, there is no national Russian-language channel. Three years ago, the state television news program in Russian was shut down. It was explained by the fact that the Poles living in Lithuania do not have such privileges.

This argument is strange. It would be possible to arrange a show in Polish since on the streets of Vilnius Polish speech is heard nearly more often than Lithuanian. But instead, foreign-language nationwide broadcasts were eliminated entirely. In fact, the incident of the Russian language without interpretation into Lithuanian on air is an exception and not a rule, as the nationalists are trying to present it.

The use of the Russian language in public bodies is another sad story. The author of the article in Lietuvos rytas is delighted that one can speak Lithuanian at a police station. He would be happy to learn that there, as in any public office, one can speak only Lithuanian. No statement in Russian (and Polish) language will be accepted. The official documents are rarely issued in minority languages.

This situation is everywhere. Meanwhile, in Vilnius, Russians comprise more than 20 percent of the population, in Klaipeda - over 30, and in the town of Visaginas, located near the closed Ignalina nuclear power plant, the majority of the population are Russian. Under the European Charter of regional languages, in the areas where representatives of some nations make up 20 percent of the population, they have the right to use their language in state institutions. In addition, street signs should be in two languages, which is not the case.

Mikhail Alexandrov, head of the department of the Institute of Baltic countries, CIS and Baltic, commented on the situation around the TV scandal, as well as the position of the Russian-speaking population in Lithuania generally.

"To date, Russians in Lithuania are just four or five per cent of the population. In contrast to Latvia and Estonia, all of them were granted citizenship in 1991. There is no direct language discrimination - they have their own schools, their own newspapers. But the situation is far from blissful. And the story with the television program is evidence to it.

In Lithuania, there is no discrimination based on language, but there is discrimination on a national basis. Russians are considered disloyal citizens, focused on Russia, nostalgic for the Soviet past. And this is not welcomed in the modern Baltic country. It is enough to think about the attitude of the Lithuanian authorities towards "the Soviet occupation" and the requirements that Russia pays damages for the years Lithuania had to stay in the USSR. As a result, Russians are not allowed anywhere near power, and their presence on television is limited.

However, local Poles are also discriminated against. Their national rights are also not fully respected. For example, they also fail to succeed in having signs in Polish installed in the places of residence. However, among the Poles there are less of those who are willing to apologize for the past sins of their nation-state.

The dissatisfaction with the skater because of the language is something from the area of clinical psychiatry. Why are people born in Russia must speak Lithuanian on TV? Imagine that we would make the Dutch Guus Hiddink and Dick Advocaat speak before the cameras in Russian only on the grounds that they have trained (or are training) team in Russia. There are plenty of examples where an athlete was born in one country, and competed in favor of another one.

So the nationalists, who wrote and published an article in Lietuvos rytas, simply have a case of sick imagination."