Who pays for the loss of life in Iran?

Since the victory of Iran's Islamic Revolution in 1979 which toppled the U.S.-backed regime of Shah Mohammad Reza Pahlavi, Iran has been facing with devastating and agonizing financial sanctions of the United States and its European allies who didn't favor the post-revolutionary Iran's doctrine of confrontation with the superpowers and its denial of Western liberal democratic values. 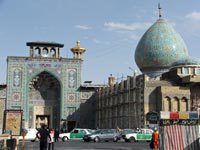 The 1979 revolution which put an end to 2,500 years of imperial monarchy in Iran was pivoted on theocratic and ideological values which the sumptuous, thrilling West usually tends to dislike and rebuff. Under the spiritual leadership of Imam Khomeini, Iranians declared that they wouldn't need the support of Western and Eastern superpowers, will stand on their own feet and only seek to realize a political regime which establishes its bases and principles in accordance with morality and Islamic solidarity.

Iran's ideological disagreement with the West and its efforts to fulfill independence as an Islamic state, however, cost for the Iranian people heavily. First of all, the United States spurred its regional puppet, the late dictator Saddam Hussein, on to launch a massive, crushing war against Iran so as to push the country's newly-established political regime to annihilation. The 8-year war demolished Iran's infrastructures irreversibly, caused irreparable damages to country's economy and left more than 350,000 Iranians dead.

The 8-year resistance of the Iranian people, however, rendered the plans of the U.S. and its Baathist ally futile. Iran rose from the rubbles of 8-year war with Iraq and set out to emerge as a regional superpower gradually. Iranians recreated the country's war-torn economy once again, renewed the obliterated infrastructures, appeased the pains of the families of 350,000 martyrs with compassion and brought hopes to the hearts of those who had come to think that a political state with the ideological pillars of Islam would be impossible to survive.

The animosity of the United States and its cronies, however, didn't seem to be ending. In 1984, the United States approved its first set of sanctions against Iran which would prohibit Washington from selling American weapons to Tehran. During the presidency of Ayatollah Hashemi Rafsanjani, the sanctions got tougher and broader. In April 1995, President Bill Clinton issued a total embargo on U.S. dealings with Iran, banning every kind of financial transaction with the war-hit country. In 1996, the United States Congress passed the Iran-Libya Sanctions Act under which all the foreign firms and companies that provide investments over $20 million for the development of petrochemical projects in Iran would be penalized. The most inequitable and unreasonable sanctions against Iran, however, were those which would were endorsed in 1995 and disallowed the aviation companies around the world to sell aircrafts and repair parts to the Iranian airlines directly.

Iran's aviation fleet which is chiefly comprised of Russian low-quality Tupelov and outdated Airbus and Fokker planes is one of the most vulnerable fleets in the world which suffers from increasing dilapidation and is considered to be highly at risk due to the unjust sanctions which are imposed against the country.

In December 2005, BBC World published a report in which it was expressively stated that Iran's civil and military aviation fleet is undergoing intense safety setbacks. The report came after an Iranian Air Force C-130E military transport aircraft crashed into a residential complex in Tehran, killing 128 people including 68 reporters and journalists that were supposed to cover a military drill off the country's southern coast on the Persian Gulf.

Iran has experienced several deadly air accidents in which hundreds of innocent civilians lost their lives. On July 15, 2009, the Caspian Airlines Flight 7908 heading from Tehran to Yerevan crashed near the village of Jannatabad in northern Iran, killing 168 passengers and cabin crews. Among the dead were all members of Iran's national youth judo team members and several other prominent persons including a former parliament member and the wife of Georgian Ambassador to Tehran.

On July 24, 2009, another deadly plane crash happened in Iran which cost the life of 16 people. While attempting to land, the plane skidded off the runway and broke into a wall, killing 16 out of 153 passengers and crew members who were aboard the plane.

Unfortunately, the frequency of deadly plane crashes in Iran has been so high that made Iran's aviation fleets one of the most insecure and unsafe ones in the world. Tens of people die each year as a result of a childish altercation which seems to have no rational basis. The United States has failed to dictate its political will to Iran and resorts to this failure as a pretext for punishing its people.

The United States and its European allies who boast of themselves as being the harbingers of human rights and liberty have obliviously forgotten that they are simply human beings who lose their lives as a result of the sanctions which they've devised. The civilian passengers who are destined to die in the insecure flights of Iran's aviation fleet are the victims of those who have long trumpeted in our ears that they're the sole defenders of human rights. If the life of each human being is respectable, then who is responsible for the lives of these hundreds of people who pass away before the eyes of the so-called international community which is always alert to caution about the violation of human rights in Iran and other independent countries? Isn't the life of these people who get in the dilapidated Russian planes of Iran's fleet and embrace death to the most extreme point of imagination respectable that you've deprived them of having the opportunity to experience a safe and secure trip? If you're at loggerheads with the government of Iran, what's the fault of its innocent civilians whom you're punishing collectively?