Poland again discusses the versions of the tragic air crash in Russia. The local media said that the high-ranking passengers of the presidential jetliner put pressure on the pilots shortly before the crash. 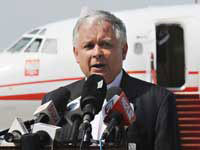 Poland's TVN channel and Warsaw Business Journal published the previously unexposed fragment of the black box recording. According to the fragment, chief pilot Arkadiusz Protasiuk said: "If we (I) don't land, he (they) will kill me."

TVN said that they had obtained the information from unofficial sources.

Warsaw Business Journal reminded of the versions that were discussed after the tragedy. One of them said that President Lech Kaczynski wanted the pilot to land the plane at the airport of Smolensk at all costs. Russian flight control officers offered the crew of the Polish plane to land at an alternate airdrome because of the thick fog, but the Polish pilots seemed to have disregarded the option.

The journal also reminded of a story that happened two years ago. Lech Kaczynski went to Georgia after the war in South Ossetia in 2008 to support his Georgian counterpart Mikhail Saakashvili. The pilot of Kaczynski's plane did not land the aircraft at the airport of Tbilisi because of unfavorable weather conditions and military actions taking place not far from the airport. Nevertheless, Kaczynski rejected the variant of landing in Baku, Azerbaijan, and called the pilot a "coward."

Robert Zawada, an aviation expert with the Polish Sejm, stated that either Kaczynski himself and/or the commander of the Air Force of Poland, Andrjei Blasik, could be putting pressure on the pilots before the crash. The top military official was one of the two individuals staying in the cockpit.

"If this new fragment is authentic, we can understand how determined the pilot was in his decision. He made another circle above the area before landing, which means that he was very concerned about the consequences of not landing the plane in Smolesnk," Zawada said.

Michal Fiszer, a pilot of the Polish Air force, said that VIPs may often put pressure on pilots because they want everyone to do what they want and the way they want. Fischer did not refer to Kaczynski directly, but it was clear whom he was talking about.

The government of Poland and the defense department have not released any comments yet. The head of the nation's internal affairs ministry Jerzi Miller stated July 12 that the committee for the investigation of the reasons of the Tu-154 crash was expected to complete its work before the end of this year.

Poland's notorious deputy Janusz Palikot stated that Lech Kaczynski was morally responsible for the death of 95 people because it was him who was arranging the visit to Russia. The deputy even suggested that Lech Kaczynski was not sober on April 10, when the tragedy occurred. The president was 25 minutes late for the flight. When on board, he claimed that he should arrive for the ceremony in Katyn on time and at all costs.

However, even Palikot's party fellows did not support their colleague and said that Palikot should be expelled from their faction.

Jaroslaw Kaczynski, the brother of the late Polish president, stated that Lech Kaczynski could in no way be related to the reasons that led to the crash of the presidential jetliner. He believes that it is the responsibility of the government of Poland and the nation's Prime Minister Donald Tusk. The government refused to assign the funds for purchasing a new airplane for the president. As a result, Jaroslaw Kaczynski concluded, his brother had to fly a very old plane.

Some officials from the Polish political elite continue to support the conspiracy theory claiming that Kaczynski's plane crashed because of the actions of the Russian special services. Some of them even believe that the thick fog above Smolensk was of artificial origin.

Neither President Bronislaw Komorowski, nor Prime Minister Donald Tusk complained of the work of the Russian special services. Quote on the contrary, the officials stated many times that Russian and Polish experts were working together.

In addition, the Polish authorities accepted the Russian version which said that the plane crashed as a result of the mistake, which the pilots had made in poor visibility. The reason for that mistake is still a mystery, though.

The presidential race in Poland is over, but the speculation on the subject continues. Many of those who investigate the plane crash are not interested in what really happened on board the presidential liner. They simply want to blame Russia and their political opponents for everything.