The French Parliament has banned burqa-style Islamic veils. Polls show that 83 percent of the population supports this idea. Nevertheless, this piece of legislation has caused great controversy. Experts fear that this innovation may cause frustration among French Muslims. 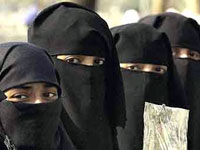 Regardless, during the week, while National Assembly deputies were discussing the bill, the parliament building was heavily guarded by police.

Under the bill, wearing burqa and its variations in public places will be completely prohibited. Violators of the law, which include persons convicted of coercion to wear clothing which completely covers the female body and face, would face a fine, which can be substituted with a year in prison.

Parliamentary debates that took place recently showed that Sarkozy's ruling party has reached a compromise with the opposition mostly represented by socialists. Most likely, the law will be adopted. Then it will be studied by the Senate and the State Council of the country. Once the law is passed by the parliament, it will be a mere formality and only slight adjustments to the text of the law might be made.

Russia Today: Moscow to teach expats rules of the game

Belgium, whose officials introduced a similar ban in April of this year, pioneered banning burqa in Europe.

In 2009, French authorities decided to consider this issue at the legislative level. Numerous complaints of indigenous French, frightened and irritated by the appearance of “faceless” figures on the streets of their cities, became the basis for discussion.

In January of 2010 a parliamentary commission was established to deal specifically with the burqa issue. The commission has concluded that wearing the full hijab was a challenge to the republic.

On May 11, the lower house of the Parliament expressed the need to protect those women who were exposed to violence and pressure, including those who are forced to wear a burqa covering body and face against their will.

Members of the parliament found burqa to violate women’s freedom and gender equality, which is not compatible with the norms of democratic France. Security measures were taken into account as well. It is very easy to smuggle weapons or explosives under burqa.

However, the willingness of the French authorities to ban burqa is not sensational. This idea has been in the air since 2004. Then the ban on wearing its variation, the hijab, was introduced in public schools. Soon the French consulates abroad have been instructed not to issue visas for faceless visitors.

The ban on wearing burqa in public places fulfills Nicolas Sarkozy’s campaign promises. He called the fight against the “attempts to impose alien values on France” one of his main goals. This was what gave him a large part of the electorate of the far-right Jean-Marie Le Pen and made him the President of France in May of 2007.

Sarkozy has repeatedly drawn attention to the burqa issue. According to him, this type of clothes degrades women. He said France could not allow having women who were prisoners of the burqa, isolated from public life, deprived of self-determination. He added that this had nothing to do with how a woman's dignity is understood in the French republic. It turns out that the burqa issue is highly relevant for France.

“Burqa and its variations are very rare among French Muslims,” said Lana Rawanduz-Fada, a fellow of the Institute of Oriental Studies, RAS in an interview with Pravda.ru. “Usually it is worn by immigrants from the Gulf, especially Saudi Arabia, as well as by some Indian and Pakistani Muslims. They constitute only a small part of the total Muslim population of France. Immigrants from Maghreb represent the majority of Muslims in France, and it is not customary for them to wear this type of clothing. And more so it is not used by the Persian community of the country represented mostly by very liberal religious opponents of the current Iranian religious authorities.”

Indeed, according to official statistics, only approximately two thousand women wear the burqa and its variations (nikab, chador and hijab) in France. It is worth mentioning that the total number of Muslims in the country is 5.4 million.

So what is the matter? Perhaps opponents of Sarkozy are somewhat right accusing him of excessive populism and his attempts to “invent a problem that does not exist.”Apparently, in order to “switch” the public's attention.

Sarkozy is accused of illegal receiving of funds (during the election campaign in 2007) from one of the richest women in the world, Lilian Betancourt, owner of cosmetics empire L'Oreal. The President himself has denied the charges, calling them”disgraceful.” He declared that “defamation is often a reaction” to those whose interests are affected by politicians.

Another interesting fact: Sarkozy is being attacked for trying to introduce the government's pension reform, under which the retirement age in the country will be raised from 60 to 62 years. And, perhaps, inflating the “threat” posed by women in burqa is the French President’s distraction maneuver.